Greene on State v. Mann: Did Ruffin Fudge the Facts?

This is the fourth and final entry in a series of invited guest posts by Sally Greene on newly discovered archival evidence in State v. Mann (1829). See also post 1, post 2, and post 3.

One curiosity about State v. Mann is the timeline of Lydia’s hiring and the way Judge Ruffin handled it. It’s possible he massaged the facts just enough to make a potentially troubling gap disappear. With his keen eye for detail, Ruffin could easily 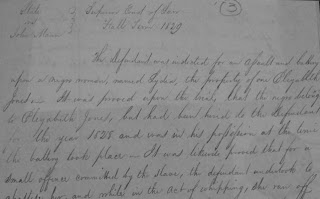 have latched onto this gap and avoided the broad holding that he claimed he had no choice but to issue.

According to the Chowan County trial records, the shooting occurred on March 1, 1829. These records also state that Lydia had been hired by John Mann for the year 1828: “It was proved upon trial, that the negro belonged to Elizabeth Jones, but had been hired to the Defendant for the year 1828 and was in his possession at the time the battery took place.” The case report in the Supreme Court file says the same. There’s no assertion that the contract was formally renewed for 1829.

By custom, hirings followed the calendar year. Harriet Jacobs tells us this, as does another Chowan County slave, Allen Parker. The accounting records kept by Josiah Small, Elizabeth Jones’ guardian, demonstrate that Lydia was indeed hired out January to January. Jacobs tells us that informal renewals (bypassing another trip “to the hiring-ground”) did occur; but if that had been the case, the recital of the facts could have been clearer.

No issue was raised at trial regarding whether a valid contract of hire was in force. The jury was told that Lydia had been hired for 1828 and was “in [Mann’s] possession” on the date of the assault. The jury instruction does not seem to depend on a finding that the contract had been renewed. The judge “charged the jury that that if they believed the punishment inflicted by the defendant was cruel unreasonable and disproportionate to the offence committed by the slave, that in Law the defendant who had only a special property in the slave was guilty.” It’s not clear whether the court cared about the distinction between Mann’s “hire” of Lydia in 1828 and his continued “possession” of her: the jury was asked to assume simply that Mann had only a qualified, “special property” in her and on that basis found him guilty.

Where this issue becomes really interesting is in Ruffin’s drafts.

Two drafts that preceded the final, published draft are included in Vol. 4 of Ruffin’s collected papers. From the first draft: “The slave had been hired by the defendant for the year 1828 from E. Jones; and the battery complained of was committed during that year.” By the second draft, Ruffin apparently had realized his mistake, for this dra 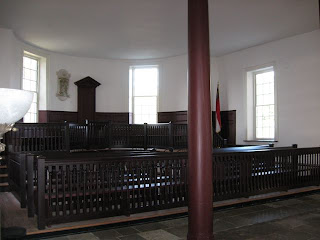 ft is less specific: “Here the slave had been hired by the defendant and was in his possession; and the battery was committed during the period of hiring” (emphasis added; remember that this is precisely what the trial record does not say). This sentence is unchanged in the final draft.

Also in the second and final drafts is a sweeping statement not found in the first: “Our laws uniformly treat the master, overseer or other person having the possession and command of the slave, as entitled to the same authority.”

If Ruffin had thought it mattered legally whether the contract had been renewed or not, such a question sounds like a mixed question of law and fact that could have formed a basis for returning the case to the trial court. Instead, he appears to have gone in the opposite direction—embracing the ambiguity as a means of widening the scope of persons who could stand in the shoes of the master. State v. Mann in its final form would isolate a slave’s master along with anyone “having the possession and command of the slave” from prosecution for assault and battery.