Kastenberg on "the Blackstone of Military Law"

Recently published is Joshua E. Kastenberg's The Blackstone of Military Law: Colonel William Winthrop (Scarecrow Press, 2009). The table of contents for this biography for this author of the leading American treatise of military law is here. The publisher explains: 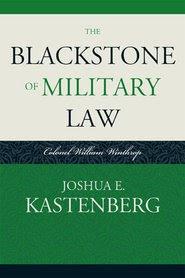 Colonel William Winthrop singularly was the most influential person in developing the military law of the United States. A half century ago, the Supreme Court tendered to Winthrop the title, "The Blackstone of Military Law," meaning simply that his influence outshone all others. He has been cited over 20 times by the highest court and well over a 1,000 times by other federal courts, state courts, and legal texts. In this, he surpasses most other legal scholars, save Joseph Story, John Marshall, or Felix Frankfurter. But while biographies of each of these Supreme Court Justices have been written, there has been none to date on Winthrop.

The Blackstone of Military Law: Colonel William Winthrop is the first biography on this important figure in military and legal history. Written in both a chronological and thematic format, author Joshua E. Kastenberg begins with Winthrop's legal training, his involvement in abolitionism, his military experiences during the Civil War, and his long tenure as a judge advocate. This biography provides the necessary context to fully appreciate Winthrop's work, its meaning, and its continued relevance.
Posted by Dan Ernst at 1:51 AM