David Warrington, Special Collections Librarian at the Harvard Law School Library announces, via the law library's blog, the opening of the papers of the great federal judge, Henry J. Friendly. The inventory is here. According to the announcement, 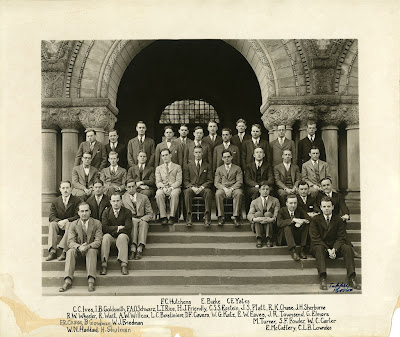 Henry Friendly (HLS ’27) served on the United States Court of Appeals for the Second Circuit from 1959-1974, serving as Chief Judge from 1971-1973. He clerked for Louis Brandeis in 1927-1928 and then entered private practice where he worked for the next 31 years before his appointment to the Second Circuit by President Eisenhower.

The majority of the materials found in the Henry J. Friendly Papers reflect his career as a federal judge on the Second Circuit Court of Appeals. Judge Friendly’s case files constitute the bulk of the collection. Also of interest are his bench books which contain hand-written notes on the cases he heard from 1959 to 1985. The collection also holds a small amount of Judge Friendly’s professional and personal correspondence, some of which dates back to his time as a student at Harvard University.

I'll just add that although of course it's terrific to have Friendly's case files open, what I'd really love to have access to are the files at Cleary Gottlieb that would show him to be one of the great regulatory lawyers of the twentieth century. His very brief interview at the Columbia Oral History Office could only hint at his work for Pan Am.

(Friendly appears above in the group picture of the editorial board of the Harvard Law Review for 1925-26, which you may click on to enlarge. He stands in the back, immediately behind David Cavers, who is seated at the very center of the photograph. Note two other legal professorial worthies: Wilber Katz, the University of Chicago law dean, to Cavers's immediate left, and Yale's Harry Shulman, seated, second from the bottom, on the lower left, in the dark jacket with his arms crossed.)