Greene on new evidence on an old case, State v. Mann, and why it matters

In a series of invited guest posts, starting below, Sally Greene tells the story of how she came upon a crucial file in the archives that had eluded some of the nation's leading schola

rs for years. And she discusses how the file, thought for so long to be missing, affects the way we should think about the landmark slavery case, State v. Mann (1829).

Greene's work on the case appears in “State v. Mann Exhumed,” recently posted on SSRN. The article expands upon Greene's remarks at a symposium, hosted by Greene and Eric Muller at the University of North Carolina in 2007, “The Perils of Public Homage: Thomas Ruffin and State v. Mann in History and Memory.” The current volume of the North Carolina Law Review is made up of papers from this symposium. It includes contributions from a number of legal history luminaries, including Sanford Levinson, Eric L. Muller, Alfred L. Brophy, Laura F. Edwards, Mark Tushnet, and John Orth.
As a legal historian, Sally Greene occupies her own category. She is the only legal historian I know of who some readers can go to the polls and vote for. Well known and highly regarded among civil rights historians, Greene is an Adjunct Professor at the University of North Carolina Law School and an elected member of the Chapel Hill Town Council, where she focuses especially on issues of affordable housing, homelessness, environmental conservation, neighborhood preservation, historic preservation, and public art. I first encountered Greene in her former role as an eloquent blogger at Greenespace. Her contact information is here.
Sally Greene begins:

Of all the cases involving American slaves and their masters, none rivals State v. Mann for the stark brutal coldness with which the master’s authority is articulated and defended. In this North Carolina case from 1829, Thomas Ruffin held that masters (including hirers of slaves) were immune from prosecution for assault and battery: “The power of the master must be absolute to render the submission of the slave perfect.” 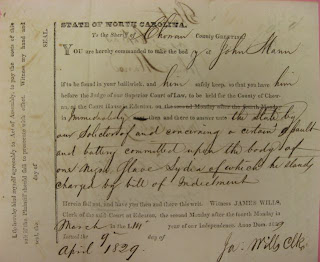 Ruffin’s words resounded with such force that, ironically, the opinion gained more traction among abolitionists than it did in the South. Most notable, perhaps, was Harriet Beecher Stowe’s reaction:

"No one can read this decision, so fine and clear in its expression, so dignified and solemn in its earnestness, and so dreadful in its results, without feeling at once deep respect for the man and horror for the system."

Stowe took Ruffin’s opinion at face value. She believed him when he wrote of “the struggle . . . in the Judge's own breast between the feelings of the man, and the duty of the magistrate.” Setting the tone for readings that would continue into the present, Stowe took Ruffin at his word that something larger than his own moral code, something vast and immoveable called “the law,” compelled him to overturn a jury’s conviction of a slave hirer for shooting an enslaved woman in the back.

Interpreting State v. Mann in our own time has been complicated by a seeming lack of historical evidence. Although the Supreme Court file for the case lay ready to hand in the North Carolina State Archives, nothing appeared to have survived of the trial record beyond a brief entry in the superior court minutes. In his 2003 casebook on State v. Mann, Mark Tushnet suggested that the trial records were destroyed during the Civil War. Accordingly, when it comes to factoring the dynamics of the trial into an interpretation of Ruffin’s reversal, thoughtful analyses by Tushnet and others have relied on no more than educated guesswork.

To the contrary, key documents are preserved in the archives. Though incomplete, they outline a trial of a desperately poor white man of questionable character who had shot an enslaved woman whom he had hired. The woman, Lydia, belonged to an orphan girl, Elizabeth Jones—a minor child of a farmer who had held a position of leadership in the county. The jurors were slaveowners with every reason to identify with Elizabeth Jones and her family. Their conviction of Mann made perfect sense on the facts and was supportable under commonlaw precedent. Seen against this enlarged context, Ruffin’s reversal loses the aura of inevitability that Stowe was willing to grant it. Rather, his repeated protestations (“I would gladly have avoided this ungrateful question”) come to sound more like what Catherine MacKinnon called the “ubiquitous trope of bench in extremis.” Using this rhetorical device, as she put it, “the more you hate to do what you are doing, the more authoritative you become.”

Stowe’s reading was ideological. Nettlesome details like whether Mann really deserved the legal status of “master” didn’t interest her. Stowe read State v. Mann as an instantiation of what lay, in her view, at the heart of the problem of slavery: good men whose consciences were overwhelmed by social conventions that found expression in seemingly immutable bad law.

But the details do matter. The more we understand about who John Mann was, for example, the less explicable—in purely legal terms—Ruffin’s opinion becomes. An expanded view of the facts can challenge assumptions about the case at the trial level as well. In the absence of these facts, Laura Edwards has focused on the victim’s gender to read the conviction of John Mann as evidence that enslaved women “occupied acknowledged spaces within southern law and even shaped its content.” Given what we know now—admittedly still an incomplete record—it’s not at all clear how Lydia influenced Mann’s conviction. We simply don’t know what the jury thought of her. We don’t know if the outcome would have been different had the victim been male. Yet we do have some reason to suspect that jurors would have sympathized with the young white woman Elizabeth Jones and her family. One juror was a cousin of Elizabeth’s guardian; another was the solicitor’s brother-in-law. (So much for conflict of interest!)

Over the course of several posts, I’ll get into some particulars of how I came to find these “missing” documents and where the trail has led.