Call for Papers: Accidental Armageddons: The Nuclear Crisis and the Culture of the Second Cold War, 1975-1989

In the most significant accident in the history of the U.S. nuclear power industry, the reactor at Three Mile Island, Pennsylvania, suffered a partial core meltdown on March 28, 1979, allowing large amounts of radioactive reactor coolant to escape. Exacerbating the panicked public reaction to this incident was the fact that a popular movie depicting a major nuclear accident, The China Syndrome, had been released only 12 days earlier. Three Mile Island was not only a turning point in public opinion regarding atomic technology but also helped fuse two protest movements together: that against nuclear energy and that against nuclear weapons.

Over the next several years, this combined “anti-nuclear” movement staged mass protests around the globe. On October 10, 1981, in the largest peace demonstration in German history to that point, between 250,000 and 300,000 demonstrators of diverse social, political, and cultural backgrounds gathered in Bonn to voice their opposition to the renewed arms race between the United States and the Soviet Union and the Federal Republic’s role in it. This protest was matched by other mass rallies in Europe and North America. Two weeks later, some 200,000 people assembled in Brussels;on November 21, Amsterdam saw almost 400,000 demonstrators; and on June12, 1982, more than one million people participated in a Nuclear Weapons Freeze demonstration in Central Park and the streets of New York City. In the fall of 1983 alone, about five million people, mostly in Western Europe, took part in demonstrations against the deployment of “EuroMissiles” (Pershing II). Protests stretched as well to Japan and Australia. Anti-nuclear activism even emerged in Eastern European countries, paving the way for greater

political dissent toward the end of the decade. The nuclear disaster in Chernobyl in April 1986 served to intensify the global anti-nuclear movement.

The proliferation of the anti-nuclear movement, which entailed the founding of countless national and transnational grassroots organizations,think tanks, and pressure groups, as well as the mass mobilization of people in street protests in diverse countries, was brought about by escalating fears of nuclear annihilation. This new anxiety over a “nuclear holocaust” had several sources, among them concerns raised by the growing environmental movement and heightened public distrust of the peaceful use of nuclear technology. Increased East-West confrontations that departed in alarming ways from the détente policies of the previous decade also fueled new worries.

In December 1979, NATO announced its “Double-Track” strategy: If arms control negotiations with the Soviet Union should fail, the West would station intermediate nuclear forces to counterbalance the Soviet Union’s recent deployment of SS-20 mid-range missiles. This momentous decision, alongside the contemporaneous Soviet invasion of Afghanistan, heightened international tensions. Finally, a new brand of conservative leader —embodied in Ronald Reagan, Margaret Thatcher, and Helmut Kohl — came to power in the West, fomenting domestic protest and renewing fears of an actual nuclear war. The world thus moved from an era of reduced tension during the détente years of the 1970s to a "Second Cold War" in the 1980s.

Nuclear fears, partly precipitated by scientists’ warnings that even a limited nuclear war could cause an apocalyptic “nuclear winter,” also reverberated within popular culture. The American television movie The Day After (1983), which depicted this doomsday scenario, reached a record audience of 100 million, noticeably impacting leading decision-makers.Anti-nuclear messages abounded: in movies such as War Games (1983) and When the Wind Blows (1986); in Jonathan Schell’s best seller The Fate of the Earth (1982); in songs by David Bowie, The Clash, and the Germansinger Nena; and in all-sta 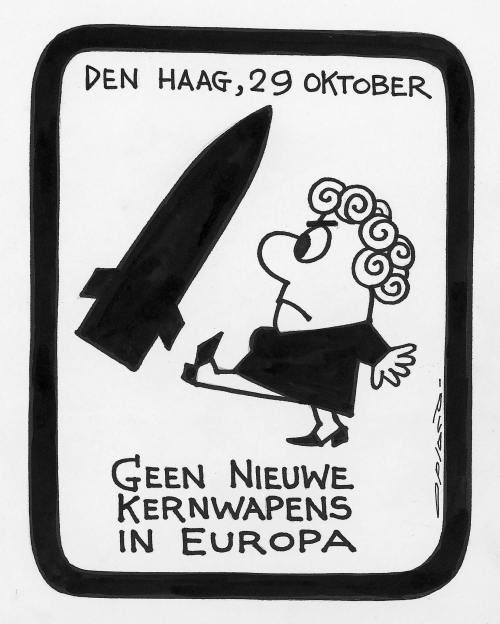 The first of its kind, the conference “Accidental Armageddons” seeks to explore the political and cultural discourse on nuclear weapons and atomic energy during the Second Cold War. While welcoming myriad approaches, the conference has several core goals:

(1) To explore diplomatic, political, and strategic debates surrounding nuclear armaments and the doctrines governing their possible use.“Traditional” actors, such as the political, diplomatic, and military elites, certainly shaped these debates, but “anti-establishment” forces such as civil society organizations and activist groups also played an important role within them.
(2) To merge “establishment” perspectives with an analyses of protest cultures by looking at non-state actors, grassroots activists, civil society organizations, and artists.
(3) To transcend the traditional East-West divide of the Cold War by examining both sides of the Iron Curtain, the views and activities of those in “non-aligned” countries, and the cooperation of policy makers, organizations, activists, scientists, and intellectuals across borders.
(4) To understand how "ecological" protests against the civilian use of nuclear energy and activism against nuclear weapons converged in a new, comprehensive anti-nuclear movement. That movement, from diverse vantage points, articulated a new and profound critique of the postwar, industrial, and technological modernity that had emerged after 1945.
(5) To establish how nuclear anxiety and fears of environmental apocalypse facilitated the rise of global consciousness and conceptions of global citizenship.

The conference will place special emphasis on the cultural and trans-/international dimensions of nuclear discourse.

Accordingly, we invite proposals on the following topics:

• cultural representations of nuclear weapons, energy, and war in film, literature, the media, and the arts
• the deployment of such representations by protest groups
• the global dimension of both nuclear discourse and the anti-nuclear movement
• public responses to nuclear discourse and the anti-nuclear movement
• national grassroots organizations (e.g., the Swedish Peace and Arbitration Society, Finland's Committee of 100, Great Britain's Campaign for Nuclear Disarmament, America’s Ploughshares)
• transnational protest organizations (e.g., European Nuclear Disarmament, Women for Peace, Pax Christi, International Physicians for the Prevention of Nuclear War)
• the ideology and practices of the peace and environmental movements
• individual demonstrations and key activists (e.g., Randall Forsberg, Petra Kelly, the Berrigans, etc.)
• activist and dissident networks between East and West
• security cultures
• government reactions to cultural and political protest
• the efficacy of anti-nuclear protest
• contemporary images of nuclear apocalypse and representations of 80s-era anti-nuclear politics

Please send a paper proposal of no more than 500 words and a brief CV via e-mail to Bärbel Thomas (b.thomas@ghi-dc.org).

The deadline for submission is March 1, 2010. Participants will be notified by the end of March.

Expenses for travel and accommodation will be covered, though you may defray organizing costs by soliciting funds from your home institution.