While the Legal History Blog feeds to Twitter, so that Twitterers can easily follow us, we don't really exploit this form of social networking through 140 character tweets on the issues of the day. But other legal historians do. Josh Stein and Gautham Rao have created lawhistory, where they even tweeted the recent American Society for Legal History conferen 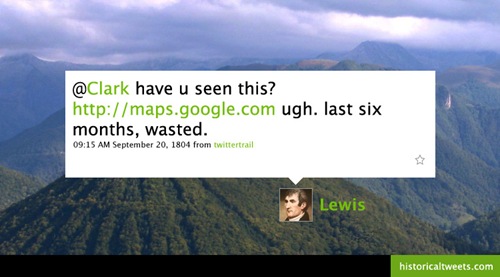 ce. In this guest post, Josh and Gautham describe how they use Twitter as legal historians, and they include a helpful list of legal history "tweeps."

Josh Stein is the Bernard and Irene Schwartz Postdoctoral Fellow at the New York Historical Society /New School for Social Research, and Gautham Rao is Assistant Professor in History, NJIT/Rutgers-Newark. And here's their post:

Many folks see Twitter as a flash-in-the-pan fad, primarily attracting narcissists who need broadcast to the world the meaningless minutiae of the quotidian. Critics argue that 140 characters is not enough for a coherent thought. But twitter has become a powerful tool for the sharing of knowledge and news. Legal historians, with access to both legal and historical (and yes, legal-historical) tweets will find insights into current events along with recommendations and links to current scholarship.

We first discussed what became the @lawhistory twitter feed during this summer's Hurst Summer Institute in Madison, Wisconsin. We thought Twitter was neat precisely because it was real-time--it functioned, quite literally, in the moment. With the right search terms and tags (e.g. #Sotomayor) it was possible to monitor discussions about pressing, contemporary legal developments and issues. We thought that the very same, simple tools might allow us to inject history and historical context into these discussions. This has been somewhat true. We have amassed over one-hundred followers who receive a few "tweets" from us every week providing brief historical backgrounds on the day's 'it-issue,' beginning with the Sotomayor nomination in early July, to 'Gates-gate' a month later, to healthcare in September (and beyond).

But we have also found other uses for the @lawhistory feed. One of us (Stein) has found an effective means to showcase an ongoing interest into the history of violence, while the other (Rao) has engaged with inquiries about the state. Stein’s posts tend to broach issues broadly, as open questions. Rao’s posts are typically brief questions with suggestions for further reading. We have also live-tweeted from a few conferences, including the most recent ASLH Annual Meeting in Dallas.

What does the future hold? I'm not sure that we have much in the way of an answer. But @lawhistory has been a fun and educational way for us to relate our interest in legal history to a broader audience in an unfiltered forum with global reach. Early adopters of twitter have been waiting for a critical mass of quality tweets. The potential for academic tweeting is enormous; a stream of news and scholarship flows from one’s handpicked sources. Below is a list of “tweeps” worth checking out – but branch out, seek new feeds worth following and then, soon enough, you might find yourself tweeting your ideas to the world, enjoying your perch on a 21st century soapbox.