Wood reviews Slauter, The State as a Work of Art

"In 1776 Americans had been exhilarated by the prospect of creating their own government," wrote Gordon Wood last summer, in a review I have just come across. 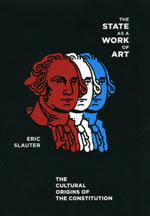 "How few of the human race," John Adams rejoiced, "have ever enjoyed an opportunity of making an election of government, more than of air, soil, or climate, for themselves or their children." All previous nations, they told themselves over and over, had been compelled to accept their constitutions from some conqueror or some supreme lawgiver, or had found themselves entrapped by a form of government molded by accident, caprice, or violence. But Americans knew that they were, as John Jay declared, "the first people whom heaven has favoured with an opportunity of deliberating upon, and choosing the forms of government under which they should live." They became the architects of their constitutions, and thus for them the state became a work of art, a distinctly artificial entity. Drawing out the implications of that idea in the making of the Constitution is the theme of Eric Slauter's richly imaginative book.

Wood's review takes up The State as a Work of Art: The Cultural Origins of the Constitution by Eric Slauter, in the July 1, 2009, New Republic. Hat tip to U.S. Intellectual History.

Slauter's book, Wood writes, "is the first full-scale effort by a literary scholar to bring the special tools of his discipline to bear on the Constitution and its cultural origins. The result is a smart, strange, and frustrating book."

Wood has many quibbles, but finds the final essay "The Godless Constitution and the Sacred Rights of Man," to be "the best in the book," suggesting that "perhaps this chapter alone vindicates Slauter's aim of using literary analysis to relate the popular culture to constitutional issues."