Blasts from the Past, Chicago-Style 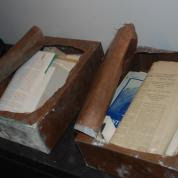 It’s not often that I find documents relating to my teaching and research in the pages of an alumni magazine, but that’s what happened when I opened the Spring 2010 issue of The University of Chicago Law School Record. It seems that last fall the law school opened two time capsules–copper boxes sealed in 1903 and 1958–that had been interred in a cornerstone. As described here and illustrated here, over the ensuing months the documents were readied for public use by the library’s conservation staff. The Record published reproductions of several documents, and Chicago will shortly post images of them and others on a website I'll link to when it goes on line.

In the interim, here are my two favorites from the Record. The first (right;

click to enlarge) is an announcement setting out the curriculum taught at the law school in 1903. As readers of Frank L. Ellsworth’s Law on the Midway (1977) and William C. Chase’s American Law School and the Rise of Administrative Government (1982), will readily appreciate, it is an instructive contrast with the one Ernst Freund proposed but saw suppressed when James Barr Ames refused to permit Joseph Beale to serve as 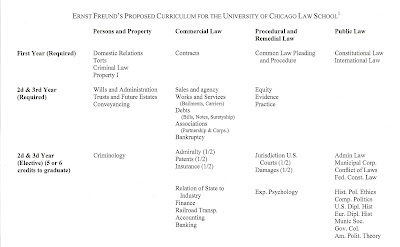 Chicago’s founding dean if its curriculum departed so wildly from the “pure law” taught at the Harvard. A table summarizing Freund's curriculum (left) appeared as an appendix to Edwin Brown Firmage, “Ernst Freund—Pioneer of Administrative Law” (M.S. thesis, Brigham Young University, 1962), 118. Firmage published the bulk of this thesis as an anonymous student note: “Ernst Freund—Pioneer of Administrative Law,” University of Chicago Law Review 29 (1962): 755-81.

My other favorite is a statement contributed by–who else?–Roscoe Pound for the 1958 time 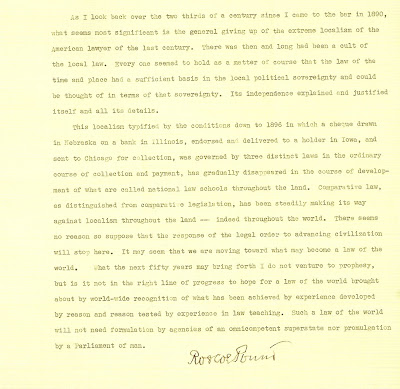 capsule. In championing of “experience developed by reason and reason tested by experience in law teaching” over the “agencies of an omnicompetent superstate,” it places Pound on a straight line between his report for the ABA’s Special Committee on Administrative Law in 1938 and his dalliances with Melvin Belli and the National Association of Claimants’ Compensation Attorneys in the 1960s, as described by John Fabian Witt in Patriots and Cosmopolitans (2007) and my colleague Joseph Page in a soon-to-be published article, “Roscoe Pound, Melvin Belli and the Personal-Injury Bar: The Tale of an Odd Coupling.”

Update: The web exhibit is now on-line, viewable here.
Posted by Dan Ernst at 1:01 AM