Mayeri on The Story of Frontiero v. Richardson

Serena Mayeri, University of Pennsylvania Law School, has posted 'When the Trouble Started': The Story of Frontiero v. Richardson. It is forthcoming in WOMEN AND THE LAW STORIES, Elizabeth Schneider and Stephanie M. Wildman, eds., Foundation Press 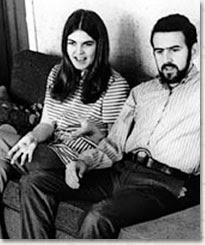 , 2010, and material from this chapter will appear in Mayeri's forthcoming book, Reasoning from Race: Feminism and the Law in the Late Civil Rights Era (Harvard Univ. Press, forthcoming). Here's the abstract:

This chapter for Women and the Law Stories (Elizabeth M. Schneider & Stephanie M. Wildman, eds., 2010) tells the story of Frontiero v. Richardson from its origins on an Air Force base in Alabama to its rich and complicated role in American constitutional law and social movement history. The Frontiero litigation provides a lens through which to explore cooperation and conflict among civil rights lawyers; the legal strategy of Ruth Bader Ginsburg and other feminist advocates; and internal debates among lower court judges and Supreme Court Justices about the nature of sex discrimination, judicial review, and constitutional change. Frontiero’s legacies are manifold, touching on the development of equal protection standards of review; the allocation of government benefits; military equality; gay rights; reproductive freedom; and the relationship between constitutional amendment advocacy and judicial interpretation.

Photo: Sharon and Richard Frontiero.
Posted by Mary L. Dudziak at 11:27 AM