I'm always on the lookout for oral histories or memoirs of New Deal lawyers--or even just those who had an opportunity to observe them at work. Long ago I read the interview of the sociologist David Riesman, Jr. (1909-2002), that appeared in Katie Louchheim's Making of the New Deal (1983), but only recently did I think to look at his contribution to Authors of Their Own Lives: Intellectual Autobiographies of Twenty American Sociologists (1990). In the Louchheim interview, Reisman, a Felix Frankfurter protege at the Harvard Law School and a Louis Brandeis clerk, depicted himself as the "House Tory" among the young law graduates of New Deal Washington. He maintained something of that attitude in the ATOTL interview: “The brisk self-assurance of many of the young New Deal lawyers struck me as awesome in some cases but as disagreeable in others.” But what I most like about the interview is his account of legal pedagogy at HLS in the 1930s. 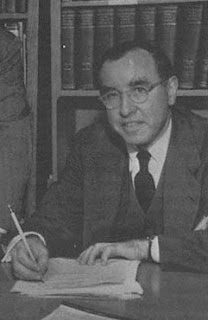 A few of us debated the merits of Legal Realism, then in vogue at Yale Law School, which seemed to me to be simpleminded reductionism. But the mode of analysis of many of the Harvard Law faculty was not vastly superior, though it was attractive because it did not seek to shock. It assumed that the task of judges, within the limits of precedent, was to balance interests. Decisions were admired that appeared appropriately to have balanced interests of contending parties and the larger groups they might be thought to represent. For example, decisions, even by the most strained reasoning, that found large corporations liable in suits for negligence and ignored the negligence of the presumably impecunious plaintiff were generally justified because they spread the risk of accidents, even though they did so in haphazard, nonactuarial ways that were of enormous benefit to the litigating bar and sometimes produced a windfall for the plaintiff. Law professors made no accompanying investigation into the real interests; assumptions were made of a generally liberal sort as to what was in whose interest, and the question was happily left at that.

To me, at least, the account suggests how thoroughly American law professors incorporated the legal sociology of Eugen Ehrlich, championed by Roscoe Pound, into their thinking, albeit in a bland and not very rigorous way. I'll confess to feeling vulnerable to a similar critique in how I deploy legal theory in my own Property class. If so, o you future Reisman, please be kind!

Image credit.
Posted by Dan Ernst at 7:00 AM