The Declaration of Independence, a spy during the American Revolution, Civil War books, and more

July is always a slow month for serious non-fiction, but Jack Rakove introduces us to a serious work that is also mystery from the era of the American Revolution: Edward Bancroft: Scientist, Author, Spy, by Thomas J. Schaeper, just published by Yale University Press. Writing in The Book (New Republic), Rakove notes that

Bancroft was originally recalled as a minor but patriotic figure in diplomatic history, on the basis of his apparently unpaid service as an unofficial secretary to the American diplomatic mission in Paris. Only the publication in 1889 of Benjamin Franklin Stevens’s great photographic reference work, Facsimiles of Manuscripts in European Archives Relating to America, 1773-1783, demonstrated the key finding: that Edward Bancroft and the mysterious “Dr. Edwards,” who was a prime source of British intelligence, proved to be one and the same person. From April 1777 through the peace negotiations of 1782-1783, Bancroft kept the British government fully informed of the work of the American diplomatic mission in Paris. Throughout the war, King George III and Lord North knew far more about what the American diplomats in Paris were doing than the Continental Congress ever belatedly learned. Yet while Bancroft doubtless worried about his security, neither the Americans nor their French allies ever suspected that he was the source of the leaks that seemed to spring and even gush freely from the Franco-American friendship.

According to Rakove, Schaeper's book "is the first work of scholarship that gives Bancroft’s career the fair and properly inquisitive treatment it deserves."  He finds it "a model biography" that "repeatedly illustrates how history should properly be written," as Schaeper "insists that every claim rest on some documented foundation." For your Fourth of July, the Boston Globe reviews DECLARATION: The Nine Tumultuous Weeks When America Became Independent, May 1-July 4, 1776 by William Hogeland.  Michael Washburn writes that the book upsets the "flawed assumption that the Declaration of Independence was also a declaration of unanimity - that the Colonists perfectly agreed in their willingness to challenge Britain and in the form of government they sought to implement."  Instead, Hogeland writes, the United States "entered history in confusion about the nature and purpose of independence."

"Throughout the first year of the conflict," Washburn continues,


much of the Colonial population hoped for reconciliation with Britain. As late as May 1776 it appeared they would prevail. Fierce anti-Royalists Samuel and John Adams, and later Ben Franklin, among other notable Founding Fathers, took the lead in the struggle for independence, and when they were defeated electorally they took to secret scheming. “Nine weeks,’’ Hogeland writes, “after voters defeated American independence, in the nearest thing to a referendum on the issue that the country ever had, America declared independence.’’ 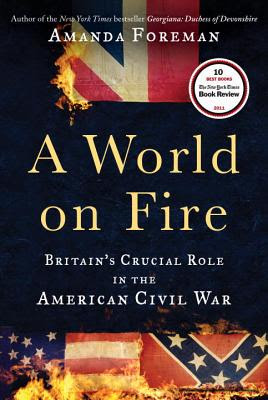 "As we begin to move through four years of commemorating the sesquicentennial of the American Civil War," James McPherson writes in the New York Review of Books, "the outpouring of new books will add to that conflict’s status as the most-written-about event in our history." McPherson takes up five of them:  A World on Fire: Britain’s Crucial Role in the American Civil War

by Amanda Foreman; The Union War

by Adam Goodheart; America Aflame: How the Civil War Created a Nation

by David Goldfield; and God’s Almost Chosen Peoples: A Religious History of the American Civil War

by George C. Rable.
"Many historians have chronicled the ebb and flow of Anglo-American and Anglo-Confederate relations, which left both sides embittered toward Britain," McPherson writes.  "The contribution of A World on Fire lies in its richness of description, vivid writing, and focus on individual personalities, including not only public officials but also (mostly on the British side) a wide variety of editors, reporters, cartoonists, aristocrats, labor leaders, soldiers of fortune, and retired naval officers commanding blockade runners."  Meanwhile,

Gary Gallagher’s The Union War analyzes the relationship between Union and emancipation, not in its connection with foreign relations but with respect to the meaning of Union for the Northern people. We rarely speak of the “Union” today except when referring to a labor organization. But to mid-nineteenth-century Americans “Union” carried powerful meanings, analogous with “nation” and “country.”

1861: The Civil War Awakening by Adam Goodheart is a "rich multitiered history of the North and its people as war first descended on the land."

America Aflame by David Goldfield is a "sweeping narrative of the Civil War era" with a revisionist approach similar to "a school of historians in the 1930s and 1940s" who "denied that sectional differences between North and South were genuinely divisive. Disparities that existed did not have to lead to war; they could have, and should have, been accommodated peacefully within the political system."  Goldfield's villains are not the "blundering generation" of partisan politicians -- the focus of earlier revisionists, but "'the invasion of evangelical Christianity into the political debate as an especially toxic factor in limiting the options of political leaders.' The 'elevation of political issues into moral causes,' especially antislavery, 'poisoned the democratic process.'"  The author "makes clear his conviction that the war should have been avoided."

"Religion in the Civil War has been an understudied subject," McPherson writes, but Rable’s God's Almost Chosen People is a "thorough study" that


goes a long way toward rectifying the neglect. In a heroic feat of research he has read hundreds of sermons, scoured scores of religious periodicals, studied the proceedings of hundreds of church conferences held during the war, and read scores of diaries and thousands of letters from soldiers and civilians to synthesize the providential meaning of the war to the people who experienced it.

Continue reading here.  Foreman, A World on Fire, is also reviewed in the New York Times.

To End All Wars:  A Story of Loyalty and Rebellion, 1914-1918 by Adam Hochschild is a "beautifully written and compellingly narrated story of Britain at war," writes Marla Stone in the Los Angeles Times.
Posted by Mary L. Dudziak at 5:19 PM