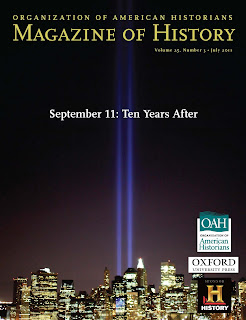 As the 10th anniversary of the 9/11 terrorist attacks nears, and as teachers and scholars try again to make sense of it all, it might be helpful to look back at what happened in classrooms across the country ten years ago.  Here is a snippet from my Forward to a new issue of the Organization of American Historians Magazine of History, September 11:  Ten Years After, which has just been published.


In classrooms across the country on September 11, 2001, lesson plans were abruptly abandoned. Students and teachers gathered around televisions, sharing the sense that “history” was being made before their eyes. Patricia Latessa, a Cincinnati high school teacher, turned on the cafeteria television “and watched history unfold.” She reflected as she watched about how the scenes of airplanes flying into buildings would impact her students (Figure 1). “The world they knew was bifurcated, cut in half, a time before and a time after” (1). An unsettling day seemed to require upsetting usual practices. The British Literature teacher at the Academy of the Sacred Heart, in Omaha, Nebraska, burst into a French class during an exam, and turned on the television (2). At another high school, the principal ordered that the televisions be turned off at midday. Colin Riebel later recalled: “We, the students, revolted. We argued this was a huge part of our history and we had a right to know what was happening to our country. The school complied and let us watch the news again” (3).

Across the nation and the world, people stopped in front of television screens. The planes exploding into the World Trade Center towers were, for many, a replay of news footage. But the burning and falling buildings were viewed by many in “real time.” The footage was broadcast “live.” Live meant at the same time, so the genuine character of the experience came from temporality, not from proximity. Stopping together in time led to a sense of simultaneity, the idea of a collective experience. A different horror, of course, was experienced in Lower Manhattan, at the Pentagon, and outside of Shanksville, Pennsylvania, the sites where hijacked planes crashed that day. People watching television sometimes felt that the crowds fleeing from the falling buildings were somehow less conscious of “what happened,” lacking access to immediate TV news coverage, an idea that was shared by many at the site of the carnage. As he escaped on foot from Ground Zero, Herbert Ouida, whose son was in WTC Tower 1 but unable to escape, heard that the twin towers had fallen, but later recalled that he “did not believe it until I got to 75th Street at my daughter's apartment and saw what happened on tv” (4).

Ten years later, how will the day that disrupted our lesson plans reappear in our curriculum as “history?”

Continue reading here.  I thought this would temporarily open-access, but today it's behind a paywall.  You should be able to access the site through your university's system, since they probably subscribe to the publication.

The full issue includes these essays:


Michael Sherry, A War “unlike any other”?: America and the World since September 11

Moustafa Bayoumi, Between Acceptance and Rejection: Muslim Americans and the Legacies of September 11

Claire Potter, Because It Is Gone Now: Teaching the September 11 Digital Archive

Lary May, Teaching American Politics and Global Hollywood in the Age of 9/11

Ralph Young, A Decade of Teachable Moments: 9/11 and the Temple University Teach-In