The Islamic World, Freud's Addiction, Money and Religion, and more in book news

Rock the Casbah: Rage and Rebellion Across the Islamic World by Robin Wright is reviewed in the Los Angeles Times.  "Anyone seeking deeper understanding of the Arab Spring needs to read Wright's formidably well-informed book," writes Wendy Smith.  The author "provides invaluable context for what she rightly terms 'the epic convulsion across the Islamic world' by listening to voices we don't usually hear."

AN ANATOMY OF ADDICTION:  Sigmund Freud, William Halsted, and the Miracle Drug Cocaine by Howard Markel is an "absorbing and thoroughly documented account of the ways in which cocaine may or may not have influenced Freud’s transformative notions of psychology, and most certainly did shape the pathbreaking American surgeon William Halsted’s vast contributions to the development of surgery," writes Sherwin Nuland in the New York Times.  Freud appears to have overcome his addiction or abuse, and it "appears unlikely that Sigmund used cocaine after 1896, during the years when he mapped out and composed his best-known and most influential works, significantly enriched and revised the techniques of psychoanalysis and . . . attempted to 'explain some of the great riddles of human existence.'"

INSIDE SCIENTOLOGY: The Story of America’s Most Secretive Religion by Janet Reitman and RENDER UNTO ROME: The Secret Life of Money in the Catholic Church by Jason Berry, are taken up in the New York Times.  "We do not need these books to tell us that money and religion make for a poisonous combination," Gary Wills writes.  "But it is of some interest to see that ancient truth confirmed in both a church as relatively new as Scientology and one as ancient as Roman Catholicism."

Also in the NY Times, THE IDEA OF AMERICA:  Reflections on the Birth of the United States by Gordon S. Wood, a collection of Wood's essays, is also a retrospective on Wood's own career and on historiography, as David Hackett Fisher shows.  Wood's Introduction and more book details are here. 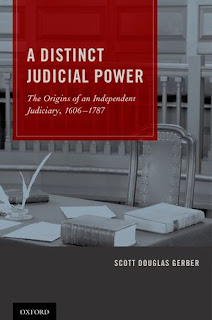 In other book news, Scott Gerber's book A Distinct Judicial Power: The Origins of an Independent Judiciary, 1606-1787 is recommended by Lawrence Solum in this week's Legal Theory Bookworm.  The book is noted here on LHB.  Gordon Wood calls it "a deeply researched study of a much neglected subject - the origins of an independent judiciary."

Note:  I've often linked to reviews of history books in the San Francisco Chronicle.  That paper has started putting at least some of its reviews behind a paywall, in a way that I can't even read a snippet to see whether it's worth sharing.  For that reason, when I can't access a review, I'm skipping links to Chronicle books. To check them out yourself, SF Chronicle books are here.
Posted by Mary L. Dudziak at 2:27 PM