Origins of the Necessary and Proper Clause 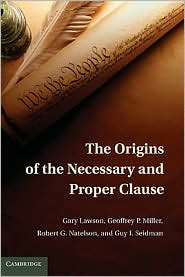 In preparation for a roundtable discussion I’ll be doing at Boston University Law School in October with Gary Lawson, Philip Hamburger, and John Manning, I’ve been reading Lawson, Geoffrey Miller, Robert Natelson, and Guy Seidman’s The Origins of the Necessary and Proper Clause (Cambridge, 2010). The Legal History Blog has already noted the book, and posted a review.

I’m not sure yet what I will say there, but I do have some preliminary thoughts. The book is very impressive in unearthing a lot of original source language linking this language in the U.S. Constitution’s Article I, Section 8, to similar (or the same) language and concepts pervading the English law of corporations and agency, in particular, at around the time of the American Founding. The suggestion is that, in light of that, despite the fact that little was said about the Necessary and Proper Clause during the Philadelphia Convention, this background – much of it private, common law background – provides considerable guidance to those looking for original understandings of this important constitutional language.

I find myself reacting to this as a political scientist: the books seems almost hermetically legal to me. The historical evidence the authors’ adduce from private law is pretty extensive, and I think they show (circumstantially) that it likely had an influence on the adoption of this language in the U.S. Constitution. But their emphasis on the roots of this clause in the law of agency reminded me a lot of the principal-agent models currently fashionable in political science (which they don’t mention) -- are a major component of rational choice modeling. I haven’t thought it through, but I want to look into whether there are synergies between this originalist take emphasizing the law of agency and current rational choice and public choice theories. Both, of course, incline quite heavily toward restrictive understanding of governmental powers -- that is, toward libertarianism. Do these folks all share underlying assumptions regarding the concept of agency that makes this work fit together as a tag-team -- even if, unwittingly -- in the intellectual life of the contemporary right?

Also, we are talking about the powers of Congress here. It is interesting that there is nothing in the book about the very special type of agency that is at issue when we are talking about a legislature: political representation. Does it make any sense – today, or from an originalist perspective – if we talk about a legislature only in terms of the principal-agent dynamic arising out of private (business) law, and not about political theories concerning representation?