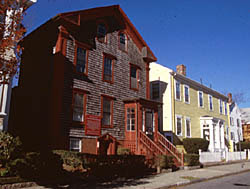 My thanks to Mary and her team at Legal History Blog for inviting me for a stint as a guest blogger for July. I’m motivated for it this holiday weekend, after having taken in some real on-the-ground history yesterday: I made my first trip to New Bedford, Massachusetts, where a friend and I toured the New Bedford Whaling Museum http://www.whalingmuseum.org/and New Bedford Whaling National Historical Park http://www.nps.gov/nebe/index.htm-- a fascinating blend of natural, maritime, industrial, literary (Melville), and African-American history (Frederick Douglass). I will take up the July 4 holiday theme with some thoughts on the Declaration and the Constitution in the next post.
Before that, a word about where I’ll be coming from this month. While I did go to law school (Northwestern), I am a political scientist – albeit one who falls under the loose rubric of “American Political Development,” the gathering place for those of us in political science with strong interests in history and the temporal dynamics of political life. I had a very unusual training for a political scientist, having gone to what was once probably the most historically-oriented political science department in the country (Cornell), where, amongst others, I studied with Richard Bensel, Elizabeth Sanders, Isaac Kramnick, and Ted Lowi in Cornell’s Government Department (as well as with Dick Polenberg and Mary Beth Norton in the History Department). In the interest of expanding the audience for my fellow “APD” scholars within political science – many of whom do scholarship that would, I think, be of interest to legal historians (I know many APD-types in political science benefit very much from the work of legal historians), I wanted to spotlight this field here.There are some nice short introductions to “APD” in the May 2011 edition of the American Historical Association’s Perspectives on Politics by Julian E. Zelizer (“The Interdisciplinarity of Political History”)

http://www.historians.org/perspectives/issues/2011/1105/1105for2.cfm and Steven Pincus and William Novak (“Political History After the Cultural Turn”)
http://www.historians.org/perspectives/issues/2011/1105/1105for3.cfm
My plan for this month’s blogging is to pretty much range freely over what I’m thinking and reading right now. As Mary mentioned, I’m doing a book on conservative constitutional thought from 1954-1980 for Cambridge University Press. I’ll likely say a fair amount about that, and follow some tangents from that project. I’ll also likely talk about other unrelated things I’m reading … and whatever comes up.