Barker on "Fugitive Slaves and the American Revolution"

Out from McFarland recently is Fugitive Slaves and the Unfinished American Revolution: Eight Cases, 1848-1856, by Gordon S. Barker, an associate professor of history at Bishop’s University in Sherbrooke, Quebec, Canada: 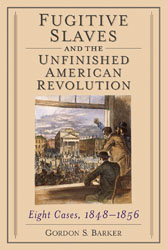 This book posits that the American Revolution-- waged to form a "more perfect union"--still raged long after the guns went silent. Eight major fugitive slave stories of the antebellum era are described and interpreted to demonstrate how fugitive slaves and their abolitionist allies embraced Patrick Henry’s motto "Give me Liberty or Give me Death" and the principles enshrined in the Declaration of Independence. African Americans and white abolitionists seized upon these dramatic events to exhort citizens to complete the Revolution by extending liberty to all Americans. Casting fugitive slaves and their slave revolt leaders as heroic American Revolutionaries seeking freedom for themselves and their enslaved brethren, this book provides a broader interpretation of the American Revolution.

Robert A. Gross, author of The Minutemen and Their World blurbs:

"No one acted on the promises of the American Revolution with greater commitment and courage than the little-known African Americans at the heart of Gordon S. Barker’s stirring new book. Caught up in the dramatic fight over the Fugitive Slave Law of 1850, these brave souls, along with their abolitionist allies, demanded ’liberty or death’ and thereby summoned Americans to renew the ’spirit of 1776.’ They were, in Barker’s apt phrase, the ’minutemen’ of their own day, on the front lines of freedom for a nation that has not yet paid them their due. Barker’s insightful and inspiring account rightly recognizes these unsung heroes of American democracy."
Posted by Dan Ernst at 10:30 AM