Disputes over land and slaves in 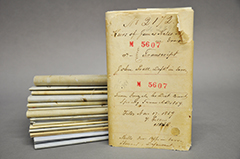 pre-Civil War Texas are among the courtroom conflicts recorded in the 19th century case files of the Texas Supreme Court. These records capture not only state legal history, but also social and cultural life during the Republic and early statehood years. Today, they reside in the Texas State Archives, which is in the midst of a long-term preservation project aimed at providing researchers with improved access to these fragile yet revealing records.

Thanks to a $5,000 grant from the Texas Historical Foundation (THF) in 2012, the State Archives, which is part of the Texas State Library and Archives Commission, initiated a comprehensive conservation and indexing project with the goal of preserving these aged documents for future scanning and the subsequent creation of an online database.