Radford's "Rise of the Public Authority"

Out from the University of Chicago Press is The Rise of the Public Authority: Statebuilding and Economic Development in Twentieth-Century America, by Gail Radford, University at Buffalo History. 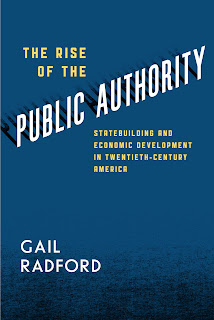 In the late nineteenth century, public officials throughout the United States began to experiment with new methods of managing their local economies and meeting the infrastructure needs of a newly urban, industrial nation. Stymied by legal and financial barriers, they created a new class of quasi-public agencies called public authorities. Today these entities operate at all levels of government, and range from tiny operations like the Springfield Parking Authority in Massachusetts, which runs thirteen parking lots and garages, to mammoth enterprises like the Tennessee Valley Authority, with nearly twelve billion dollars in revenues each year.

In The Rise of the Public Authority, Gail Radford recounts the history of these inscrutable agencies, examining how and why they were established, the varied forms they have taken, and how these pervasive but elusive mechanisms have molded our economy and politics over the past hundred years.

Among the blurbs is the following from Nelson Lichtenstein:

"Gail Radford is an imaginative student of American statecraft whose probing narrative has put an otherwise prosaic set of agencies and institutions close to the center of our understanding of statebuilding. By explaining how quasi-governmental state authorities became such a pervasive part of the way virtually every level of government finances its activities, Radford unlocks a puzzle: how so many Americans can both distrust their state and also insist upon an ever-expanding set of governmental services. This is an important and provocative book."

1. The Campaign for a Federal Fleet Corporation
2. The Creation of the Federal Land Banks
3. Municipalities Struggle to Meet New Needs
4. The Truncated Career of Autonomous Federal Agencies
5. The Federal Government Promotes Public Authorities
6. Public Authorities since the Second World War

Epilogue. The Future of Public Authorities

Appendix. Federal Corporate Agencies
Posted by Dan Ernst at 12:30 AM