Mandery, "A Wild Justice: The Death and Resurrection of Capital Punishment in America"

Our Sunday Book Review Round-up recently mentioned a new release from W.W. Norton & Co.: A Wild Justice: The Death and Resurrection of Capital Punishment in America, by Evan J. Mandery (John J. College of Criminal Justice). Here's a fuller description, from the publisher: 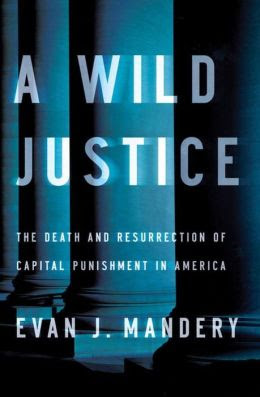 Drawing on never-before-published original source detail, the epic story of two of the most consequential, and largely forgotten, moments in Supreme Court history.

For two hundred years, the constitutionality of capital punishment had been axiomatic. But in 1962, Justice Arthur Goldberg and his clerk Alan Dershowitz dared to suggest otherwise, launching an underfunded band of civil rights attorneys on a quixotic crusade. In 1972, in a most unlikely victory, the Supreme Court struck down Georgia’s death penalty law in Furman v. Georgia. Though the decision had sharply divided the justices, nearly everyone, including the justices themselves, believed Furman would mean the end of executions in America.

Instead, states responded with a swift and decisive showing of support for capital punishment. As anxiety about crime rose and public approval of the Supreme Court declined, the stage was set in 1976 for Gregg v. Georgia, in which the Court dramatically reversed direction.

A Wild Justice is an extraordinary behind-the-scenes look at the Court, the justices, and the political complexities of one of the most racially charged and morally vexing issues of our time.


“With a powerful story and an exceptional cast of characters—including Arthur Goldberg, Alan Dershowitz, and Robert Bork at their best—A Wild Justice is a rare achievement. At once entertaining and deeply instructive, it is a piece of legal history that grapples brilliantly with capital punishment, one of the fundamental issues of American justice.” — Sean Wilentz

“A Wild Justice is sensational—a revealing and illuminating behind-the-scenes look at one of the most important chapters in the history of the Supreme Court. After reading it, you may never look at the death penalty, or the justices, the same way again.” — Jeffrey Toobin