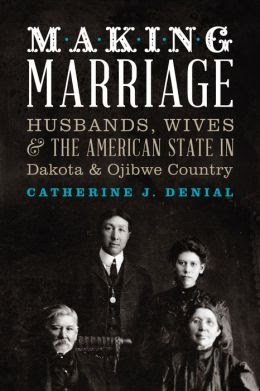 
The debate over the meaning of marriage in the United States and specifically in Minnesota is not a recent development. From 1820 to 1845, when the first significant numbers of Americans arrived in the region now called Minnesota, they carried the belief that good government and an orderly household went hand in hand. The territorial, state, and federal governments of the United States were built upon a particular vision of civic responsibility: that men, as heads of households, enter civic life on behalf of their dependents—wives, children, servants, and slaves. These dependents were deemed unfit to make personal decisions or to involve themselves in business and government—and they owed labor and obedience to their husbands, fathers, and masters.

These ideas clashed forcibly with the conceptions of kinship and social order that existed among the Upper Midwest's long-established Dakota, Ojibwe, and mixed-heritage communities. In resisting the new gender and familial roles advocated by military personnel, Indian agents, and missionaries, the region’s inhabitants frustrated American attempts to transform Indian country into a state. Indeed, many Americans were forced to compromise their own beliefs so that they could put down roots.

Through the stories of married—and divorcing—men and women in the region, Catherine J. Denial traces the uneven fortunes of American expansion in the early nineteenth century and the nation-shaping power of marital acts.