Out earlier this summer from the American Bar Association’s publishing arm is World War II Law and Lawyers: Issues, Cases, and Characters, by Thomas J. Shaw, Esq..  According to the ABA’s press release, the book 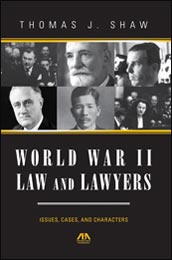 chronicles the evolving stories of more than 50 major legal issues from that period and profiles more than 300 lawyers and judges from 20 countries involved with related cases and laws.

The book, written by attorney Thomas J. Shaw, presents these legal issues through a global perspective of seven key countries. It presents each issue through the laws or decrees enacted and the people who enacted them. The book also highlights individual cases, spotlights lawyers and judges who were involved in them, and explores how these various factors affected subsequent events, including future conflicts.

The people and personalities depicted in the book — some famous as national or global leaders while others historically obscure — provide a fascinating backdrop to understanding the legal story of the war. Through its content and comprehensive coverage, the book speaks to many different audiences, including those interested in legal research and resources and others keen on better understanding World War II historical figures and filling in their knowledge of the war.

Word War II Law and Lawyers presents a wide perspective of the war period. It details, for instance, how the United States prepared for war as well as how European nations dealt with issues like neutrality, collaboration, annexation and looting of assets. The book also explores how the major Axis powers subverted legal institutions and created a military machine that supported genocide.