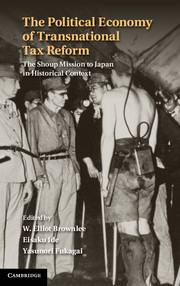 This volume of essays explores the history of the U.S. tax mission to Japan during the occupation following World War II. Under General MacArthur, economist Carl S. Shoup led the mission with the charge of framing a tax system for Japan designed to strengthen democracy and accelerate economic recovery. The volume examines the sources, conduct, and effects of the mission and situates the mission within the history of international financial and fiscal reform. The book begins by establishing the context of progressive social investigations of taxation, including Shoup's earlier tax missions to France and Cuba. It then goes on to explore the Japanese background to the Shoup mission and the process by which American and Japanese tax experts shaped their recommendations. The book then assesses and explains the mission's accomplishments in the context of the political economies of the United States and Japan. It concludes by analyzing the global implications of the mission, which became iconic among international tax reformers.

TOC after the jump.
Introduction: global tax reform and an iconic mission

Part I. The American Background

2. From Seligman to Shoup: the early Columbia school of taxation and development Ajay Mehrotra

3. The Haig-Shoup mission to France in the 1920s Frances Lynch

12. The Shoup recommendations and Japan's tax-cutting culture: why has Japan failed to reestablish the personal income tax as a key tax? Takatsugu Akaishi