Constitutional Conservatism during the Progressive Era

Out last month from Palgrave Macmillan was Toward an American Conservatism: Constitutional Conservatism during the Progressive Era, ed. Joseph W. Postell, University of Colorado at Colorado Springs, and Johnathan O'Neill, Georgia Southern University.  Here is the abstract: 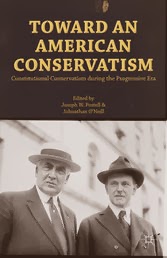 During the Progressive Era (1880-1920), leading thinkers and politicians transformed American politics. Historians and political scientists have given a great deal of attention to the progressives who effected this transformation. Yet relatively little is known about the conservatives who opposed these progressive innovations, despite the fact that they played a major role in the debates and outcomes of this period of American history. These early conservatives represent a now-forgotten source of inspiration for modern American conservatism. This volume gives these constitutional conservatives their first full explanation and demonstrates their ongoing relevance to contemporary American conservatism.

3. William Howard Taft and the Struggle for the Soul of the Constitution; Sidney M. Milkis

4. The Election of 1912 and the Origins of Constitutional Conservatism; William Schambra

6. Civilization versus Modernity: The League of Nations in the Crisis of World Civilization; W. Taylor Reveley

I did not know of the book until this week.  That’s too bad, as Hughes is a central figure in my forthcoming book, Tocqueville’s Nightmare: The Administrative State Emerges in America, 1900-1940, and I would have liked to have learned from Professor Stoner’s interpretation.  I know Professor Postell from his essay “The Anti-New Deal Progressive: Roscoe Pound’s Alternative Administrative State,” Review of Politics 74 (2012): 53-85.  In it, he rejects the thesis that Pound executed an “about face” in his thinking about the administrative state for much the same reasons I did here and will here.  Pace Jerome Frank in his If Men Were Angels, Pound never was an enthusiastic advocate of the administrative state.  Postell makes much of Pound’s position that a judiciary with the proper procedures and personnel could have made the administrative state unnecessary.  I am more impressed by how the modesty of the reforms Pound preferred as chair of the American Bar Association’s Special Committee on Administrative Law in 1937-38, which originally were limited to simplifying the procedures by which agency decisions were appealed into the courts.
Posted by Dan Ernst at 6:00 AM