Garner to Speak on His Book Collection at YLS 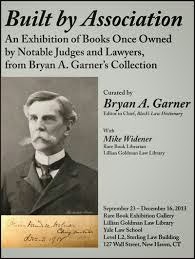 [Via H-Law we have news of an event at the Yale Law School relating to rare books in the law.]

Bryan A. Garner, the world's leading legal lexicographer, will give a talk on Monday, December 9, about the exhibit of association copies from his private book collection, which is currently on display in the Lillian Goldman Law Library, Yale Law School.

Garner, Editor in Chief of Black's Law Dictionary, has amassed a private collection of 36,000 books. He is particularly drawn to "association copies," books once owned or inscribed by their authors or other significant individuals. The inscriptions, says Garner, are an "ineffable connection" with those who once signed or owned the book.

Garner's talk is scheduled for 1pm on December 9 in Room 128 of the Yale Law School, 127 Wall Street in New Haven. A limited number of exhibit catalogues will be available for those who attend the talk.

The exhibit is open to the public, 9am-10pm daily, through December 18 on Level L2 of the Lillian Goldman Law Library, Yale Law School.
Posted by Dan Ernst at 2:02 PM