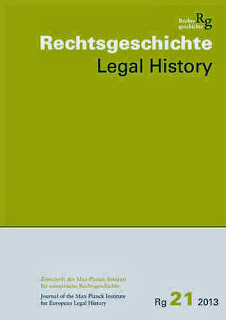 Via Juris Diversitas, we have news that the latest issue (No. 21) of Rechtsgeschichte - Legal History, the journal of the Max Planck Institute for European Legal History, is now available online. The issue, introduced, in German and English, by Thomas Duve, includes a contribution by Richard Helmholz and a symposium on Harold Berman’s Law and Revolution.  The contents follow.  We reproduce the abstract for Helmholz’s article below.  Abstracts, in English, for all articles are downloadable here.

Thorsten Keiser: Coercion in Contractual Labour Relationships in Germany from the 16th to the 20th century


The classical statements of the medieval canon law, Gratian’s Decretum (ca. 1140) and the Gregorian Decretals (1234) both dealt with baptism.  Although a ‘theological’ subject, baptism had worldly consequences and its correct performance was thought to require regulation. This article seeks to bring to light the character of the canon law’s treatment of baptism by comparing its treatment with that it applied within the law of marriage, also a sacrament of the medieval church.  It surveys and compares the verbal formulas used for both, the standards of legal finality applied to choices made by and for children, the effect of coercion upon the validity of both, the role of parents and the clergy in arranging for and performing the two sacraments, and the common problem of dealing with legal uncertainty about each sacrament’s performance and validity. It states the basic rules applied in each case. In all of these areas, the canonists sought to arrive at objective and workable standards, but they turn out to have been more willing to bend somewhat to the subjective expectations of the men and women involved in dealing with marriage than with baptism. The explanation for the differences seems to lie in the unequal value accorded to the two sacraments by the medieval church. Baptism lay at the centre of the church’s mission in the world. Marriage did not. 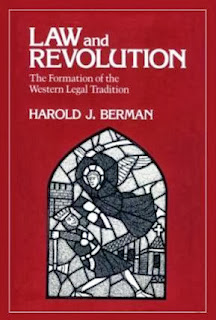 Tomasz Giaro: The East of the West. Harold J. Berman and Eastern Europe