Via the Organization of American Historians, we have learned of the death of historian Michael G. Kammen:


The OAH is saddened to learn of the passing of Michael G. Kammen. He died on November 29 2013 at the age of 77. He served as president of the Organization of American Historians from 1995 to 1996. 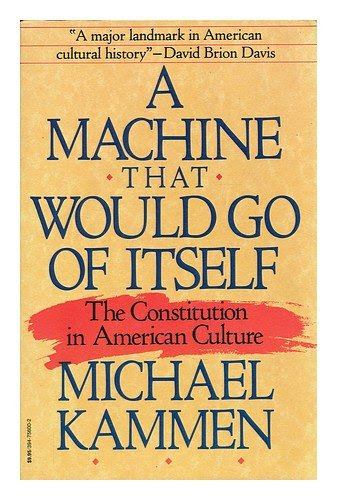 Kammen was the Newton C. Farr Professor of American History and Culture (emeritus) at Cornell University, where he taught from 1965 until 2008. In 1980-81 he held a newly created visiting professorship in American history at the Ecole des Hautes Etudes in Paris. He is an elected member of the American Academy of Arts and Sciences. In 2009 he received the American Historical Association's award for Scholarly Distinction. His books include People of Paradox: An Inquiry Concerning the Origins of American Civilization (1972), awarded the Pulitzer Prize for History in 1973; A Machine That Would Go of Itself: The Constitution in American Culture (1986), awarded the Francis Parkman Prize and the Henry Adams Prize; Mystic Chords of Memory: The Transformation of Tradition in American Culture (1991); A Time to Every Purpose: The Four Seasons in American Culture (2004), and Visual Shock: A History of Art Controversies in American Culture (2006). His most recent book was Digging Up the Dead: A History of Notable American Reburials (2010).

The Kammen family requests that memorial gifts (in lieu of flowers) be directed to the Michael Kammen Children's Book Fund at the Tompkins County Public Library, 101 Green St., Ithaca, NY 14850.

Via H-Law, Richard B. Bernstein has circulated a fuller obituary, and promises to post further information:


Born in Rochester, NY, and raised in Washington, DC, Kammen was educated at George Washington University and at Harvard University, where he earned his Ph.D. in 1964 under the direction of Bernard Bailyn.  His dissertation became the basis of his first book, A ROPE OF SAND: THE COLONIAL AGENTS, BRITISH POLITICS, AND THE AMERICAN REVOLUTION (Cornell, 1968).  He also wrote COLONIAL NEW YORK: A HISTORY (KTO Press, 1973; Oxford reprint in paperback) and other studies of 18th-century American constitutional and political history.

Kammen's first major work of general interest beyond the eighteenth century was PEOPLE OF PARADOX: AN INQUIRY CONCERNING THE ORIGINS OF AMERICAN CIVILIZATION (Knopf), which won the 1973 Pulitzer Prize for History.  His succeeding volumes charted his growing interest in the American people's engagement with their history and with the often challenging study of historical memory, including A SEASON OF YOUTH; THE AMERICAN REVOLUTION AND THE HISTORICAL IMAGINATION (1978); SPHERES OF LIBERTY: CHANGING PERCEPTIONS OF LIBERTY IN AMERICAN CULTURE (1985); the Parkman Prize-winning A MACHINE THAT WOULD GO OF ITSELF: THE CONSTITUTION AND AMERICAN CULTURE (1986), SOVEREIGNTY AND LIBERTY: CONSTITUTIONAL DISCOURSE IN AMERICAN CULTURE (1988); and MYSTIC CHORDS OF MEMORY: THE TRANSFORMATION OF TRADITION IN AMERICA CULTURE (1991).  He wrote extensively on these and related issues in books characterized by immense learning and graceful prose.

I will post further information on Prof. Kammen's life and work in future postings to H-LAW.  For now, suffice it to say that he was a generous scholar and colleague and an illuminating investigator of American history and culture, whose work has often enriched our historical understanding.