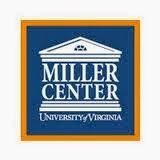 The University of Virginia’s Miller Center has named its National Fellows for 2014-15.  Each will receive a one-year, $22,000 grant to complete "dissertations that explore the historical roots of today’s most pressing political issues. The fellowship also offers some unique guidance: it pairs fellows with a senior scholar in their field to serve as a mentor, and it encourages fellows to reach beyond the traditional boundaries of the academy by training them to write op-eds and to craft their scholarship for broader audiences."

Judge Glock, Rutgers University (History)
“The Search for a Balanced Economy: The Origins of Federal Intervention in the Mortgage Market, 1916-1960”

Adam Goodman, University of Pennsylvania (History)
Project: “Mexican Migrants and the Rise of the Deportation Regime, 1942-2012”

Emily Pears, University of Virginia (Politics)
“Chords of Sympathy: The Development of National Political Attachments in the 19th Century”