Thomas on Gender Equality in the Northern District of Ohio 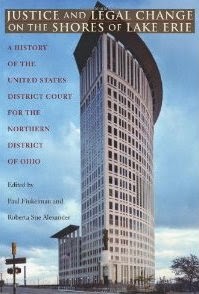 The U.S. District Court for the Northern District of Ohio, like many of its sister courts, was reluctantly drawn into the national debate over sex equality in the 1970s. The court’s response mirrored the greater social response, initially showing a hostility to claims of gender discrimination that was slowly displaced by recognition and endorsement of sex equality rights. Three of the district’s cases on women’s rights ended in the U.S. Supreme Court and helped navigate this shift toward gender equality. These cases are the focus of this book chapter written for a book collecting the "greatest hits" of Northern District court. The chapter provides the backstory, including oral narratives and original archival research, for the cases on mandatory maternity leave, LaFleur v. Cleveland School Board; informed consent abortion restrictions, Akron Center for Reproductive Health v. City of Akron; and minor abortion laws, Ohio v. Akron Center for Reproductive Health.

These three cases from Ohio together offer a snapshot of the larger societal change for women’s rights. The nascent women’s movement in the courts proceeded initially along dual fronts of employment and abortion. The Northern District cases show the tensions and commonalities between these approaches and exemplify the development of broad-scale gender litigation across the nation.