This new release from Johns Hopkins University Press appears to have some interesting connections to law: Pain: A Political History, by Keith Wailoo (Princeton University). From the Press: 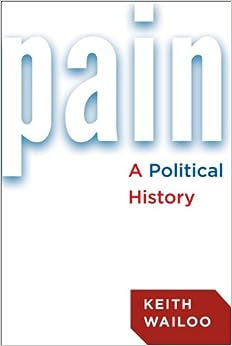 Keith Wailoo examines how pain and compassionate relief define a line between society's liberal trends and conservative tendencies. Tracing the development of pain theories in politics, medicine, and law, and legislative and social quarrels over the morality and economics of relief, Wailoo points to a tension at the heart of the conservative-liberal divide.

Beginning with the advent of a pain relief economy after World War II in response to concerns about recovering soldiers, Wailoo explores the 1960s rise of an expansive liberal pain standard, along with the emerging conviction that subjective pain was real, disabling, and compensable. These concepts were attacked during the Reagan era of the 1980s, when a conservative political backlash led to decreasing disability aid and the growing role of the courts as arbiters in the politicized struggle to define pain.

Wailoo identifies how new fronts in pain politics opened in the 1990s in states like Oregon and Michigan, where advocates for death with dignity insisted that end-of-life pain warranted full relief. In the 2006 arrest of conservative talk show host Rush Limbaugh, Wailoo finds a cautionary tale about deregulation, which spawned an unmanageable market in pain relief products as well as gaps between the overmedicated and the undertreated. Today's debates over who is in pain, who feels another's pain, and what relief is deserved form new chapters in the ongoing story of liberal relief and conservative care.

People in chronic pain have always sought relief—and have always been judged—but who decides whether someone is truly in pain? The story of pain is more than political rhetoric; it is a story of ailing bodies, broken lives, illness, and disability that has vexed government agencies and politicians from World War II to the present.