Call for Applications: The Berlin Prize 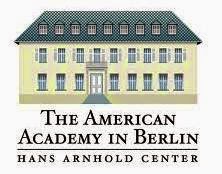 The American Academy in Berlin invites applications for its residential fellowships for 2015/2016, as well as early applications for the academic years 2016/2017 and 2017/2018. The deadline is Monday, September 29, 2014 (12 pm EST or 6 pm CET). Applications may be submitted online or mailed to the Berlin office.

The Academy welcomes applications from emerging and established scholars and from writers and professionals who wish to engage in independent study in Berlin. Approximately 25 Berlin Prizes are conferred annually. Past recipients have included historians, economists, poets and novelists, journalists, legal scholars, anthropologists, musicologists, and public policy experts, among others.  The Academy does not award fellowships in the natural sciences.

Fellowships are typically awarded for an academic semester or, on occasion, for an entire academic year. Bosch Fellowships in Public Policy may be awarded for shorter stays of six to eight weeks. Fellowship benefits include round-trip airfare, partial board, a $5,000 monthly stipend, and accommodations at the Academy's lakeside Hans Arnhold Center in the Berlin-Wannsee district.

Fellowships are restricted to individuals based permanently in the United States. US citizenship is not required; American expatriates are not eligible. Candidates in academic disciplines must have completed a PhD at the time of application. Applicants working in most other fields - such as journalism, filmmaking, law, or public policy - must have equivalent professional degrees.  Writers should have published at least one book at the time of application. The Academy gives priority to a proposal’s scholarly merit rather than any specific relevance to Germany.

Following a peer-reviewed evaluation process, an independent Selection Committee reviews finalist applications. The 2015/16 Berlin Prizes will be announced in late February 2015.
For further information and to apply online, please see [here] or contact: