[This post continues my guided tour through my recently published book, Tocqueville’s Nightmare: The Administrative State Emerges in America, 1900-1940.  The series starts here.]

I’ll begin this post with the summary I prepared for my publisher of the last chapter of Tocqueville’s Nightmare, “Pound and Frank.”  (You’ll recall that the chapter follows one on the battle over administrative law and procedure in New York in 1938.)  Then I’ll go back to the historical controversy that prompted me to write about Roscoe Pound in the first place.  In later posts, I’ll explain how the chapter completes the arc of the book.


Events in New York proved to be a dress rehearsal for the Walter-Logan bill, introduced in Congress in 1939 and vetoed by FDR late the following year.  The American Bar Association had developed the bill to meet the concerns of lawyers who practiced before the federal government, but it attracted the support of others for diverse reasons.  Roscoe Pound, forced from Harvard Law School's deanship in 1936, accused Jerome Frank, James Landis, and other legal realists of advocating "administrative absolutism."  In fact, Pound and his opponents agreed more about the administrative state than they let on; leadership of legal education was the real gravamen.  In Congress, a conservative coalition of Democrats and Republicans seized upon the bill to punish the National Labor Relations Board, the Securities and Exchange Commission at the behest of corporate contributors and from their own desire to harry the New Deal's “janizaries.”

“Pound and Frank” originated as a series of posts on this blog that grew into a conference paper.  The paper commenced: “Many legal scholars find themselves face to face with Roscoe Pound at some point in their careers.  For historians of law and politics in the twentieth-century United States, an encounter is inescapable, because of Pound’s report for the American Bar Association’s Special Committee on Administrative Law.  Published in 1938, it was, apparently, the greatest apostasy by any lawyer in the American reform tradition.”

I then quote from a marvelous statement of the prevailing view of Pound from Michael Willrich’s first book, City of Courts: Socializing Justice in Progressive Era Chicago (Cambridge University Press, 2003), 315: 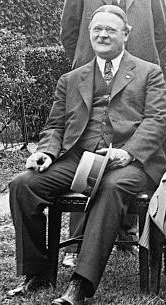 The familiar storyline is a narrative of betrayal, of one's own life's work and the people it inspired:  Brilliant young iconoclast, the best legal mind of his progressive generation, stuns the legal world in 1906 by announcing–in a speech to the ossified American Bar Association, no less–that the individualistic justice of the common law has proved unsuited to urban-industrial society, creating widespread “popular dissatisfaction with the administration of justice.”  In the 1910s he launches a broad movement for sociological jurisprudence that transforms legal education, helps to elevate the weight of social interests in judicial decision making, and lays the intellectual foundation for legal realism and the administrative state.  But just when those years of collective work were finally bearing fruit, in the New Deal and the Supreme Court’s “Constitutional Revolution of 1937,” the former progressive makes a stunning reversal and denounces the whole enterprise–his whole enterprise–as a dangerously relativistic, absolutist, un-American nightmare.  The denouement of this narrative echoes the legal realists’ own professed shock at Pound's so-called about-face.  “The reader of Pound's earlier writings,” wrote Judge Jerome Frank, “rubs his eyes” and wonders, “Can this be the same man?”

The “narrative of Pound's ‘about-face’” (to borrow Willrich's phrase) is a commonplace among legal historians.  Morton Horwitz, for example, maintained that in 1924 Pound “spoke enthusiastically" of the emergence of administration.  “Administrative regulation was not bureaucratic or standardized justice but a superior form of justice in the individual case.  What a far cry from Pound's later invocation of the judicial model as the only legitimate expression of the rule of law!”  David Wigdor wrote that "in the early years of his academic career," Pound “had advocated a large role for administrative agencies and had criticized legal traditionalists for treating them with hostility.”  By the end of the 1930s, however, “his attitudes had hardened, and he exclaimed that administrative law ‘will involve the common-law judges in a conflict analogous to that which they waged with the Stuart kings in the seventeenth century.’”  Neil Duxbury argued that Pound, "once keen for the expansion of administrative powers," was by the end of the 1930s “rallying against what he termed the recrudescence of administrative absolutism.”

Despite the dominance of the about-face narrative, historians have occasionally noted that the early Pound was a more conservative legal thinker than one would infer from Horwitz, Wigdor, Duxbury et al.  They saw continuities that made his later views appear not so much a volte-face as a shifting of weight from one foot to another.  Willrich saw that Pound called for the reform of civil procedure “to save the courts and the common law from the jurisdictional imperialism of the administrative state.”  Lewis Grossman also saw continuity, this time in Pound’s jurisprudence.  “It is often falsely assumed that Pound embraced elements of formalism only at a later stage of his career, when he was crankily resisting the Realists’ more daring modernism,” Grossman wrote in an unpublished paper.  “As Pound’s statements quoted here demonstrate, however, he started emphasizing the need for rule and form in his earliest writings.”  Although John Fabian Witt wrote that the early Pound approved of “administrative commissions on the Western European model,” Witt also saw that “there had always been a conservative streak running through Pound’s thinking on administration and the common law,” a fear that the state might extinguish “the individual” altogether.  Finally, and, most recently, Joseph Postell has squarely attacked the notion Pound ever enthusiastically championed the administrative state in an article published in The Review of Politics in 2012.

“Pound and Frank” provides a compressed survey of Pound’s early writings, manuscript and published, which show that he considered commission government at best a necessary evil.  For a somewhat fuller view, you may consult my blog posts from 2008.  To this revision of Pound’s early view of the administrative state, Tocqueville’s Nightmare adds a revision of the dean’s later view.  Just as the about-face narrative exaggerates Pound’s enthusiasm for administrative before the alleged volte-face, so does it exaggerate Pound’s hostility after the reversal was supposed to have occurred.  Pound squarely rejected Dicey’s notion of the rule of law, which New York’s trial lawyers and anti-New Deal politicians had tried to write into their state constitution.  He did not even insist on a less extreme position that Learned Hand and other liberal Republicans preferred–review of an agency’s orders by an independent “administrative court.”  Notwithstanding his bluster about “administrative absolutism”– a phrase I expect Jonathan Turley to exhume any day now–even Pound joined an emerging consensus that court-like administrative procedures would let Americans have bureaucracy and their freedom too.

[The series continues here.]
Posted by Dan Ernst at 12:30 AM