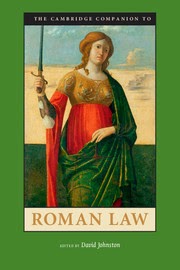 This book reflects the wide range of current scholarship on Roman law. The essays, newly-commissioned for this volume, cover the sources of evidence for classical Roman law; the elements of private law, as well as criminal and public law; and the second life of Roman law in Byzantium, in civil and canon law, and in political discourse from AD 1100 to the present. Roman law nowadays is studied in many different ways, which is reflected in the diversity of approaches in the essays. Some focus on how the law evolved in ancient Rome, others on its place in the daily life of the Roman citizen, still others on how Roman legal concepts and doctrines have been deployed through the ages. All of them are responses to one and the same thing: the sheer intellectual vitality of Roman law, which has secured its place as a central element in the intellectual tradition and history of the West.

Table of contents after the jump
Part I. Introduction:
1. Introduction David Johnston
2. Roman law and its intellectual context Laurens Winkel

Part II. Lawmaking:
3. Sources of law from the Republic to the Dominate David Ibbetson
4. Roman law in the provinces John Richardson