Lucas Richert has published Conservatism, Consumer Choice, and the Food and Drug Administration during the Reagan Era: A Prescription for Scandal (Lanham, MD: Lexington Books, 2014): 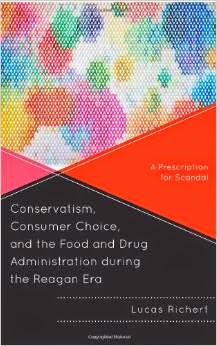 In the last quarter of the 20th century, politicians in Washington, as well as interest groups, regulatory policy makers, and drug industry leaders were forced to confront the hot-button issue of pharmaceutical regulation. The struggle always centered on product innovation, consumer protection, and choice in the free market. As the American economy stuttered in the late 1970s, the stakes were extremely high for the powerful drug industry and the American public. At the center of this drama was the Food and Drug Administration, which was censured from both the left and right of the political spectrum for being too strict and too lenient in the application of its regulatory powers.

Lucas Richert explores the FDA, drugs, and politics in the context of the watershed Reagan era, a period when the rhetoric of limited government, reduced regulation, and enhanced cooperation between businesses and U.S. regulatory agencies was on the ascent. As he investigates the controversies surrounding Laetrile, Reye’s Syndrome, Oraflex, patient package inserts, diet pills, and HIV/AIDS drugs, Richert argues that the practical application of conservative economic principles to the American drug industry was A Prescription for Scandal.

Conservatives, Consumer Choice, and the FDA in the Reagan Era is an engaging analysis of the influence of presidential ideology, congressional oversight, and the political character of the FDA’s leadership on the agency’s institutional identity and regulatory work. Lucas Richert’s compelling and nuanced perspective exposes the limits of the deregulatory ethos of the Reagan era and demonstrates the persistence of an institutional identity that has balanced the imperatives of consumer safety against those of pharmaceutical innovation. This book is a must-read for anyone interested in the recent history of pharmaceutical regulation and for policymakers engaged in the making of pharmaceutical policy.
— Dominique Tobbell, University of Minnesota
TOC after the jump.

INTRODUCTION
THE FDA IN THE POLITICAL AND REGULATORY ORDER, 1906-PRESENT (1)
DISENCHANTMENT AND DRUG REGULATION DURING THE SEVENTIES (2)
CARTER AND THE FDA (3)
OPENING MOVES: REAGAN AND THE FDA, 1980-82 (4)
THE CONTINUING EVOLUTION OF THE FDA, 1983-1984 (5)
REAGAN’S LEADERSHIP, HEALTH ACTIVISM, AND THE HIV/AIDS CRISIS (6)
THE TRIUMPH OF CONSERVATISM: SCANDAL AND BEYOND (7)
CONCLUSION (8)
Posted by Dan Ernst at 11:00 AM