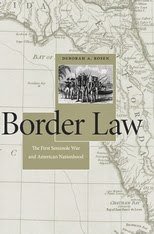 The First Seminole War of 1816-1818 played a critical role in shaping how the United States demarcated its spatial and legal boundaries during the early years of the republic. Rooted in notions of American exceptionalism, manifest destiny, and racism, the legal framework that emerged from the war laid the groundwork for the Monroe Doctrine, the Dred Scott decision, and U.S. westward expansion over the course of the nineteenth century, as Deborah Rosen explains in Border Law.

When General Andrew Jackson's troops invaded Spanish-ruled Florida in the late 1810s, they seized forts, destroyed towns, and captured or killed Spaniards, Britons, Creeks, Seminoles, and African-descended people. As Rosen shows, Americans vigorously debated these aggressive actions and raised pressing questions about the rights of wartime prisoners, the use of military tribunals, the nature of sovereignty, the rules for operating across territorial borders, the validity of preemptive strikes, and the role of race in determining legal rights. Proponents of Jackson's Florida campaigns claimed a place for the United States as a member of the European diplomatic community while at the same time asserting a regional sphere of influence and new rules regarding the application of international law.

American justifications for the incursions, which allocated rights along racial lines and allowed broad leeway for extraterritorial action, forged a more unified national identity and set a precedent for an assertive foreign policy.

Endorsements by Eliga Gould and Daniel Hulsebosch after the jump.
“In the early American republic, empire-builders headed west—to Louisiana, Texas, and the Pacific. But first they went to Florida. There, as Deborah Rosen shows in this magisterial study of Andrew Jackson’s Seminole War, Americans pioneered the legal doctrines and practices that would underpin the United States’ expansion for the next century. Blending legal history with borderland history, Indian history, the history of slavery, and military and diplomatic history, Border Law is a major contribution to the story of how America’s empire of liberty became an empire.”—Eliga Gould, author of Among the Powers of the Earth: The American Revolution and the Making of a New World Empire

“Deborah Rosen’s provocative Border Law conceptualizes the Seminole War as a defining moment of American nation-building. Beyond the diplomatic high-handedness and low territorial motives, Rosen finds that Americans struggled creatively to match their ambitions with the law of nations. On the floor of Congress and beyond, popular desire for spatial expansion, racial exclusion, and national justice overrode conventional understandings of international diplomacy and law, helping to remake that law along the way. Among other virtues, Rosen puts Native Americans, Spaniards, and Britons at the center of early American history. Part of a new political history that blends diplomacy, law, and political culture, Rosen’s in-depth examination bridges the Early Republic and Jacksonian America.”—Daniel Hulsebosch, New York University School of Law