New Release: Straumann, "Roman Law in the State of Nature" 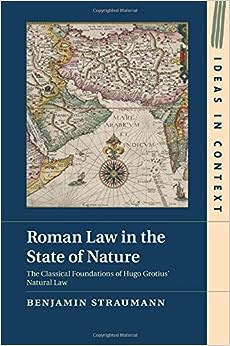 Roman Law in the State of Nature offers a new interpretation of the foundations of Hugo Grotius' natural law theory. Surveying the significance of texts from classical antiquity, Benjamin Straumann argues that certain classical texts, namely Roman law and a specifically Ciceronian brand of Stoicism, were particularly influential for Grotius in the construction of his theory of natural law. The book asserts that Grotius, a humanist steeped in Roman law, had many reasons to employ Roman tradition and explains how Cicero's ethics and Roman law – secular and offering a doctrine of the freedom of the high seas – were ideally suited to provide the rules for Grotius' state of nature. This fascinating new study offers historians, classicists and political theorists a fresh account of the historical background of the development of natural rights, natural law and of international legal norms as they emerged in seventeenth-century early modern Europe.