The second issue of Tulsa Law Review's Volume 50 is out and full of book reviews. The table of contents for the special issue can be found here, and a full list of reviewed books can be downloaded here.

Early Americanists will find Jane Fiegen Green's "Procreation and Power in Early America" of interest. In her review she includes

"Why are governments interested in the procreative habits of their citizens? Why especially does a democratic government—ostensibly formed to protect individual rights—concern itself with the private activities of consenting adults? These questions could be raised in debates over same-sex marriage or insurance coverage for contraception in the twenty-first century United States. But three recent books on the intersection of family, sex, and the law show us why the regulation of parents and children has been central to the organization of power since the colonial period."

Leslie Goldstein's review, "The Birth and Rebirth of Civil Rights in America" takes a look at both
Laura Woliver's "Dissent is Patriotic: Disobedient Founders, Narratives, and Street Battles," includes reviews of
There's loads more reviews after the break.
More Con Law can be found in Joseph Reisert's "Living Dogma" which includes a review of Slavery, Abortion, and the Politics of Constitutional Meaning by Justin Buckley Dyer (Cambridge University Press).

Kathleen Sullivan's "The Civic Constitution" includes discussion of Kristin A. Goss's The Paradox of Gender Equality: How American Women's Groups Gained and Lost Their Public Voice (University of Michigan Press).

"Goss explains that the women’s movement did not dismantle after the Nineteenth Amendment. Replacing the “wave” metaphor with that of a river, Goss follows the tributaries, where she finds plenty of civic activity after 1920. There was a multiplicity of groups working for both women’s issues and staking claim to broader national issues, such as war and democracy. Furthermore, these groups were membership-based, with local chapters and active participation, working their way up to a national presence that testified on Capitol Hill. Goss thus identifies ongoing, vibrant civic engagement after 1920. In contrast, the period after the peak of the second wave women’s movement shows women’s groups that tend to be professional organizations focused more narrowly on specific women’s issues. Testimony before Congress dropped, and the scope of women’s groups’ claims narrowed as well. Goss identifies this as a loss of women’s civic place, which “encompasses the civic identity on which groups draw to construct their interests and jus- tify their political authority, the modes of collective action that groups deploy to press those interests, and the policy niche that groups legitimately occupy.”"

"“How does an alien imposition attain legitimacy?” asks Nicholas Parrillo in Against the Profit Motive: The Salary Revolution in American Government, 1780-1940. Parrillo and three other historians address this question in a group of outstanding new books on the rise of American administrative law. Each book reflects the various ways in which American administrative law has been an alien imposition: filling a “hole” in the text of the Constitution that did not address administrative powers; changing the traditional separation of powers of legislative rule-making and judicial adjudication with individualized due process; imposing centralized bureaucracy over local self-rule; imposing the rule of experts over the populace; and imposing one party’s structure over the other party’s dissent."

Then there is Rashmi Dyal-Chand's review, "Housing as Holdout: Segregation in American Neighborhoods," which includes Climbing Mount Laurel: The Struggle for Affordable Housing and Social Mobility in an American Suburb by Douglas S. Massey et al. (Princeton University Press).

Joseph Blocher examines "New Approaches to Old Questions in Gun Scholarship," and includes in his review essay:
In "The Highs and Lows of Wild Justice," by Corinna Lain, Evan J. Mandery's A Wild Justice: The Death and Resurrection of Capital Punishment in America (Norton) is reviewed. 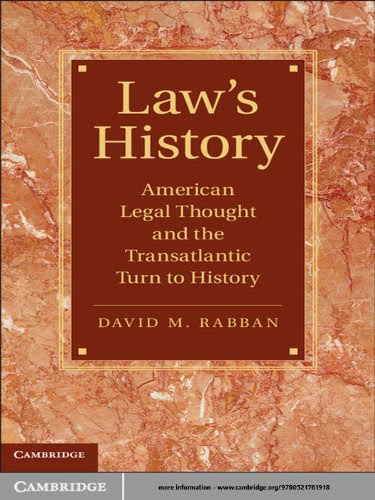 "The two books featured in this review join the modern trend of revisionist scholarship that reassesses legal history inherited from the Progressive Era. Motivated by their belief that Progressives misrepresented conservatives of the era as mere apologists for the economic elite, the authors of Toward an American Conservatism maintain that some conservative leaders of the era were actually advocates of a philosophy faithful to the Constitution. Similarly, Laws History observes that misrepresentations by leading Progressive scholars helped sociological jurisprudence supplant history as a means of studying and understanding law. David Rabban’s goal is to return the study of legal history to a promi- nent role. Beyond this similarity the books are vastly different in style, method, and purpose."

The executive branch is the focus of Marc Landy's "Incrementalism v. Disjuncture: The President and American Political Development," which reviews
Posted by Anonymous at 4:30 AM