Just out from Oxford University Press is Executing the Rosenbergs: Death and Diplomacy in a Cold War World, by Lori Clune, an  Associate Professor of History at California State University, Fresno. 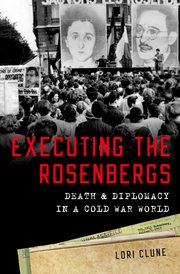 In 1950, Julius and Ethel Rosenberg were arrested for allegedly passing information about the atomic bomb to the Soviet Union, an affair FBI Director J. Edgar Hoover labeled the "crime of the century." Their case became an international sensation, inspiring petitions, letters of support, newspaper editorials, and protests in countries around the world. Nevertheless, the Rosenbergs were executed after years of appeals, making them the only civilians ever put to death for conspiracy-related activities. Yet even after their executions, protests continued. The Rosenberg case quickly transformed into legend, while the media spotlight shifted to their two orphaned sons.

In Executing the Rosenbergs, Lori Clune demonstrates that the Rosenberg case played a pivotal role in the world's perception of the United States. Based on newly discovered documents from the State Department, Clune narrates the widespread dissent against the Rosenberg decision in 80 cities and 48 countries. Even as the Truman and Eisenhower administrations attempted to turn the case into pro-democracy propaganda, U.S. allies and potential allies questioned whether the United States had the moral authority to win the Cold War. Meanwhile, the death of Stalin in 1953 also raised the stakes of the executions; without a clear hero and villain, the struggle between democracy and communism shifted into morally ambiguous terrain.

Transcending questions of guilt or innocence, Clune weaves the case -and its aftermath -into the fabric of the Cold War, revealing its far-reaching global effects. An original approach to one of the most fascinating episodes in Cold War history, Executing the Rosenbergs broadens a quintessentially American story into a global one.

Endorsements after the jump.
"Lori Clune's gripping monograph shows how the United States attempted to 'spin' the Rosenberg case and the couples' executions in the Cold War propaganda campaign of the early 1950s, and failed. Clune's impeccable research not only exposes Washington's efforts at shaping overseas reactions and coverage of the Rosenbergs' fate; it also points to the contradictory response the case engendered within the government itself as officials struggled to downplay critical coverage abroad and defuse an international movement that grew to include nearly 50 countries whose citizens were passionately concerned about their draconian sentencing."-Katherine Sibley, author of Red Spies in America: Stolen Secrets and the Dawn of the Cold War

"Do we need another book on the Rosenbergs? We need this one-Lori Clune's remarkable account of how the United States lost the moral upper ground during one of the Cold War's most important crusades is a must read for anyone interested in the Eisenhower presidency, global activism, Cold War politics, and espionage." -Kathryn Statler, University of San Diego

"Do we need another book on the Rosenbergs? We need this one-Lori Clune's remarkable account of how the United States lost the moral upper ground during one of the Cold War's most important crusades is a must read for anyone interested in the Eisenhower presidency, global activism, Cold War politics, and espionage." -Kathryn Statler, University of San Diego

"Balanced, yet provocative, Executing the Rosenbergs tells a compelling story about the global ramifications of one of the Cold War's most enduring controversies. Readers familiar with the tale of the Cold War's most famous atomic spies will learn much from the wealth of new insights and information Lori Clune brings to the table. Newcomers to the Rosenberg case will find in these pages a gripping, compelling, and accessible narrative-one free of the polarizing tint that has colored other historical writings on the case."-Kenneth Osgood, author of Total Cold War: Eisenhower's Secret Propaganda Battle at Home and Abroad
Posted by Dan Ernst at 9:30 AM