Mayeux on Batlan's "Women and Justice for the Poor"

H-Law has published a review of Women and Justice for the Poor: A History of Legal Aid, 1863-1945 (Cambridge University Press), by former guest blogger Felice Batlan (IIT Chicago-Kent College of Law). The review is by Sara Mayeux (University of Pennsylvania). Here are the first two paragraphs: 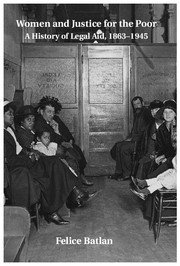 In this bold work of both legal history and professional critique, Felice Batlan sets out to recover “the ‘real’ history of legal aid, a story that the predominantly male leaders in the field of legal aid intentionally masked” (p. 3). For decades, chroniclers of organized legal assistance to the poor have begun the tale in 1876, when the entity now known as the Legal Aid Society of New York was established to serve German immigrants. Even today, the Legal Aid Society touts itself as the nation’s “oldest” organization of its kind.[1] Not so, according to Batlan, who writes instead: “Organized legal aid began with the founding of the Working Women’s Protective Union in New York City in 1863” (p. 17).

Batlan reveals that women “lay lawyers” began serving the poor years before the organized legal profession got involved. Moreover, women continued to play a dominant role in legal aid efforts through the 1940s, whether as lawyers, “lay lawyers,” or social workers. But reform-minded bar leaders like the Boston lawyer Reginald Heber Smith—the Progressive Era legal aid movement’s most prominent evangelist—worried that the perception of legal aid as feminized charity work might undermine their campaign to secure the bar’s support. And so, in their conference proceedings, law review articles, and policy reports, they erased the history of women’s involvement, falsely enshrining the Legal Aid Society as the movement’s vanguard.