Just out from the University of Chicago Press is National Duties: Custom Houses and the Making of the American State, by Gautham Rao, American University: 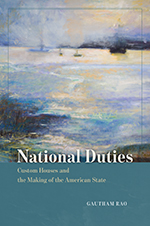 In the wake of the American Revolution, if you had asked a citizen whether his fledgling state would survive more than two centuries, the answer would have been far from confident. The problem, as is so often the case, was money. Left millions of dollars of debt by the war, the nascent federal government created a system of taxes on imported goods and installed custom houses at the nation’s ports, which were charged with collecting these fees. Gradually, the houses amassed enough revenue from import merchants to stabilize the new government. But, as the fragile United States was dependent on this same revenue, the merchants at the same time gained outsized influence over the daily affairs of the custom houses. As the United States tried to police this commerce in the early nineteenth century, the merchants’ stranglehold on custom house governance proved to be formidable.

In National Duties, Gautham Rao makes the case that the origins of the federal government and the modern American state lie in these conflicts at government custom houses between the American Revolution and the presidency of Andrew Jackson. He argues that the contours of the government emerged from the push-and-pull between these groups, with commercial interests gradually losing power to the administrative state, which only continued to grow and lives on today.


Brian Balogh, University of Virginia
“Brilliantly researched and smartly argued, National Duties deploys prodigious research to construct a social history of governance in the early Republic. Rao gives us a methodological monument that will not be replicated for some time, connecting high fiscal policy to its implementation on the ground, and placing that contingent relationship in the broader social context of mob action and the cultural context of the British fiscal-military state on the one hand, and republican ideology on the other. Besides providing a methodological template for historians interested in governance and the law, regardless of site or time period, Rao’s approach yields a major substantive payoff. He argues persuasively that the great centralizer, Alexander Hamilton, was in fact instrumental in replicating a decentralized financial regime and it was Jefferson and Madison, so often portrayed as the protectors of state’s rights who shored up the plenary power of the national government.”

Steven Pincus, Yale University
“Rao’s elegantly written and deeply researched National Duties tells a remarkably important and unknown story: the central role that the custom house played in the creation of a strong American state. Using reams of little known material from the customs records in the National Archives, Rao shows how the early republic depended overwhelmingly on customs revenue to pay its debts, fund its wars, and finance governance. This dependence on overseas trade gave the merchants who plied that trade inordinate influence in shaping the contours of the American state. Rao demonstrates that in the wake of the Napoleonic wars James Monroe began to dismantle the old custom house system, which had continued many of the traditions of the British Empire. In so doing, Monroe did a great deal to create a truly national American state. Rao’s book both demonstrates the strength of the early American state and tells an important story about how the relationship between the state and merchant capital was transformed in the early Republic.”

TOC after the jump.
Acknowledgments

A Note on Archival Sources