Deal's "Law of the Whale Hunt" 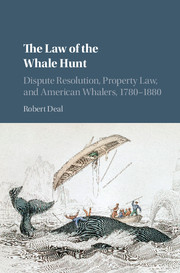 Whale oil lit the cities and greased the machines of the Industrial Revolution. In light of its importance, competition between whalers was high. Far from courts and law enforcement, competing crews of American whalers not known for their gentility and armed with harpoons tended to resolve disputes at sea over ownership of whales. Left to settle arguments on their own, whalemen created norms and customs to decide ownership of whales pursued by multiple crews. The Law of the Whale Hunt provides an innovative examination of how property law was created in the absence of formal legal institutions regulating the American whaling industry in the eighteenth and nineteenth centuries. Using depositions, court testimony, logbooks, and other previously unused primary sources, Robert Deal tells an exciting story of American whalers hunting in waters from the North Atlantic to the South Pacific and the Sea of Okhotsk.

1. Introduction
2. The biology, economics, and geography of Anglo-American whaling
3. Fast-fish, loose-fish
4. Iron holds the whale
5. Laws of honor
6. Halves
7. The environment of litigation
8. An untragic commons
9. Conclusion
Posted by Dan Ernst at 9:30 AM