Although we didn’t realize it until quite recently, even before news about Georgetown and its slaves broke, Jennifer Oast, Associate Professor of History at Bloomsburg University, Pennsylvania, had published (with Cambridge University Press) a book that provides some context, Institutional Slavery: Slaveholding Churches, Schools, Colleges, and Businesses in Virginia, 1680–1860: 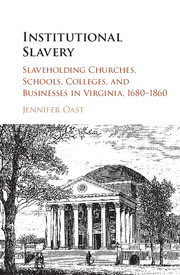 The traditional image of slavery begins with a master and a slave. However, not all slaves had traditional masters; some were owned instead by institutions, such as church congregations, schools, colleges, and businesses. This practice was pervasive in early Virginia; its educational, religious, and philanthropic institutions were literally built on the backs of slaves. Virginia's first industrial economy was also developed with the skilled labor of African American slaves. This book focuses on institutional slavery in Virginia as it was practiced by the Anglican and Presbyterian churches, free schools, and four universities: the College of William and Mary, Hampden-Sydney College, the University of Virginia, and Hollins College. It also examines the use of slave labor by businesses and the Commonwealth of Virginia in industrial endeavors. This is not only an account of how institutions used slavery to further their missions, but also of the slaves who belonged to institutions.