Jan Kuklík, the director of the Institute of Law History, Faculty of Law at Charles University, Prague.has posted Czech Law in Historical Contexts, with Karolinum Press, which is distributed in the United States by the University of Chicago Press: 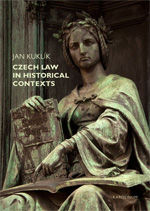 The legal system of the present-day Czech Republic cannot be understood without sufficient knowledge of its historical roots and evolution. Kuklík traces the development of Czech law from its origins as a form of Slavic law to its current position, reflecting the influence of both Roman law and the legal systems of neighboring countries. The twentieth century is of particular importance due to the establishment of an independent Czechoslovakia in 1918 and its split in 1993 into the Czech Republic and the Slovak Republic. It was a century encompassing periods of democratic as well as totalitarian regimes, and major political, ideological, economic, and social changes, making Czech Law in Historical Context an ideal case study for researchers interested in the transition of democratic legal systems into totalitarian regimes, and vice versa.

TOC after the jump.
Introductory remarks
1. Beginnings of the Czech state and law
2. Development of law during the era of the Luxemburgs until 1419
3. The Hussite period
4. Law during the Estate Monarchy
5. Law during the Age of Absolution
6. Enlightened Absolutism
7. Codification of Austrian civil law
8. Austrian constitutional development 1848-1914 and Czech national movement
9. Austrian legal development 1848-1918
10. The break-up of the Habsburg Empire and the establishment of Czechoslovakia
11. Continuities and discontinuities in the initial period of Czechoslovak legal development
12. Constitutional development of the First Czechoslovak Republic
13. Legal aspects of national minorities
14. Changes in Czechoslovak law 1918-1938
15. The Munich Agreement and the Protectorate of Bohemia & Moravia
16. Re-establishment of Czechoslovakia in pre-Munich borders
17. Presidential decrees (so-called Beneš decrees)
18. The Third Czechoslovakia Republic 1945-1948
19. May Constitution of 1948 and the political system of the People’s Democracy
20. Changes in Czechoslovak legal system 1948-1960
21. Political trials and other forms of persecution
22. Changes in land law - forced collectivization
23. Social security and labor law
24. The Socialist Constitution of 1960
25. Recodification of criminal law in the 1960s
26. New civil law of the 1960s
Posted by Dan Ernst at 12:30 AM