Desan on the Political Economy of Chisolm v. Georgia

Christine A. Desan, Harvard Law School, has posted Contesting the Character of the Political Economy in the Early Republic, which appeared in The House and Senate in the 1790s: Petitioning, Lobbying, and Institutional Development, ed. Kenneth R. Bowling and Donald R. Kennon (2002), 178-232: 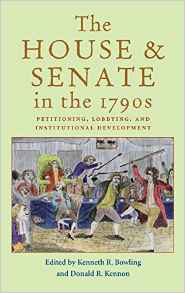 The U.S. Constitution left it notoriously ambiguous whether individuals could sue sovereign states for breach of contract in federal court. Within a few years, the issue had produced a constitutional crisis, famously acted out in the Supreme Court’s determination that states were subject to suit, Chisholm v. Georgia, 2 U.S. 419 (1793), and the political reversal of that permission, the Eleventh Amendment. The essay reconstructs the context that gave rise to the suit, its determination, and its political reversal. Colonial Americans had created a constitutional order that located legislative authority over the economy as the essential channel to self-determination, popular sovereignty, and calibrated justice over shared resources. But both political economic practices and conceptions about sovereignty were changing. The Supreme Court’s jurisdictional assertion was part of the movement towards an order that elevated judicial authority, locating it as the critical instrumentality in a liberal state where rights were supposed to exist independent of social and economic circumstance. The strategies adopted by the Chisholm claimant to define the obligations of contract and obtain a remedy showcase that transition. From Robert Farquhar’s 1784 death at sea on his way to obtain relief to the state of Georgia’s 1889 claim to reimbursement from the United States in the U.S. Court of Claims, the effort spanned more than a century. It took both individual and state claimants from executive officials and legislative committees to the increasingly ascendant courts.