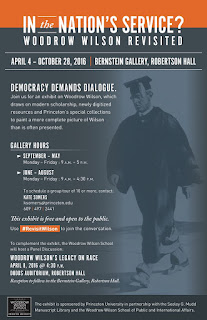 A very interesting and important example of public history–the “public” being a university community–opens today in the Marver and Sheva Bernstein Gallery of the Woodrow Wilson School of Public and International Affairs at Princeton University.  As you might recall, last fall, President Christopher Eisgruber appointed a trustee committee to examine how Princeton should recognize the legacy of its (and the nation’s) former president, Woodrow Wilson.  The committee’s report, approved by the Board of Trustees, was released today.  It calls for “a renewed and expanded commitment to diversity and inclusion at Princeton,” the creation of a new “pipeline program” to identify “highly qualified undergraduates from a broad range of colleges and universities and encourage and prepare them to pursue doctoral degrees,” and the alteration of the university’s informal motto to “Princeton in the Nation’s Service and the Service of Humanity,“ a change that would take up a suggestion by Justice Sotomayer.  It also recommends that the Wilson School and the Wilson residential college continue to bear Wilson’s name, and stresses that Princeton must be “honest and forthcoming about its history” and acknowledge “Wilson's failings and shortcomings as well as the visions and achievements that led to the naming of the school and the college in the first place.”

As a first step in that last task, the exhibit In the Nation’s Service? Woodrow Wilson Revisited opens today in the Bernstein Gallery, where it will run through October 26.  It draws on contemporary scholarship and the extensive holdings of Princeton’s Seeley G. Mudd Manuscript Library.  A panel discussion of Wilson’s legacy will be held in the Wilson School’s Dodds Auditorium at 4:30 on April 8.  We will post the link to the on-line exhibit when it becomes available.  Early press reports are here, here, here, and here.

Update: Here's the link to the on-line version of the exhibit.  It includes a very good bibliography.
Posted by Dan Ernst at 11:00 AM