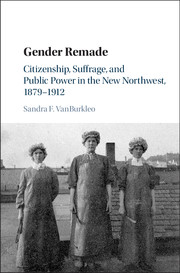 Gender Remade explores a little-known experiment in gender equality in Washington Territory in the 1870s and 1880s. Building on path-breaking innovations in marital and civil equality, lawmakers extended a long list of political rights and obligations to both men and women, including the right to serve on juries and hold public office. As the territory moved toward statehood, however, jury duty and constitutional co-sovereignty proved to be particularly controversial; in the end, 'modernization' and national integration brought disastrous losses for women until 1910, when political rights were partially restored. Losses to women's sovereignty were profound and enduring - a finding that points, not to rights and powers, but to constitutionalism and the power of social practice as Americans struggled to establish gender equality. Gender Remade is a significant contribution to the understudied legal history of the American West, especially the role that legal culture played in transitioning from territory to statehood.

1. 'We are kings and queens': introduction
2. 'She does not go into utter slavery': toward equality and co-sovereignty
3. 'Equal rights with man in every respect': practicing mixed-sex democracy
4. 'A compound creature of the statute': jury duty and social disintegration
5. 'A double head in nature...is a monstrosity': internecine warfare
6. 'Fraternalism permeates the atmosphere': remaking gender and public power
7. 'We contemplate no sweeping reform': constitutionalizing the home vote
8. 'Every woman is a law unto herself': rights, obligations, and legitimacy
Afterword: a bibliographic commentary.
Posted by Dan Ernst at 12:30 AM