My Georgetown Law colleague Anne Fleming has just published City of Debtors: A Century of Fringe Finance with the Harvard University Press: 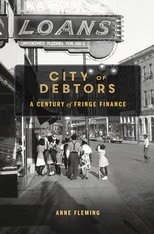 Since the rise of the small-sum lending industry in the 1890s, people on the lowest rungs of the economic ladder in the United States have been asked to pay the greatest price for credit. Again and again, Americans have asked why the most fragile borrowers face the highest costs for access to the smallest loans. To protect low-wage workers in need of credit, reformers have repeatedly turned to law, only to face the vexing question of where to draw the line between necessary protection and overreaching paternalism.

City of Debtors shows how each generation of Americans has tackled the problem of fringe finance, using law to redefine the meaning of justice within capitalism for those on the economic margins. Anne Fleming tells the story of the small-sum lending industry’s growth and regulation from the ground up, following the people who navigated the market for small loans and those who shaped its development at the state and local level. Fleming’s focus on the city and state of New York, which served as incubators for numerous lending reforms that later spread throughout the nation, differentiates her approach from work that has centered on federal regulation. It also reveals the overlooked challenges of governing a modern financial industry within a federalist framework.

Fleming’s detailed work contributes to the broader and ongoing debate about the meaning of justice within capitalistic societies, by exploring the fault line in the landscape of capitalism where poverty, the welfare state, and consumer credit converge.


“Fleming’s fascinating, carefully researched study reveals the pivotal role New York played in the development of consumer-credit regulation. New York might be an outlier in the twenty-first century, but at the turn of the twentieth century, when small-sum loans originated, every major thread was connected to the events and personalities of New York.”—Ronald J. Mann, author of Bankruptcy and the U.S. Supreme Court

“Anne Fleming’s pathbreaking narrative of small-sum lending in New York City brings alive loan sharks, lenders seeking respectability, reformers, crusading lawyers, and the debtors themselves, all while focusing on a problem that plagues us to this day: the poor need money desperately, have little credit to obtain it, and thus are easy marks for exploitation.”—Robert W. Gordon, author of Taming the Past: Essays on Law in History and History in Law

“Loan sharks and banks reside on a single lending continuum. Fleming takes us to the only space on that continuum where marginal wage-earners could legally, albeit expensively, borrow money. City of Debtors is essential reading for anyone who would understand that world and its consequences, then and now.”—Bruce H. Mann, author of Republic of Debtors: Bankruptcy in the Age of American Independence

“It would be easy to get lost in the thicket of loopholes, appeals, FTC rules, ‘wage assignments,’ ‘waiver of defense clauses,’ and similar arcana, but Fleming is a surefooted guide. The reader comes out with a much deeper understanding of the shadowy, constantly changing landscape at the edges of standard finance and economic daily life.”—Bethany Moreton, author of To Serve God and Wal-Mart: The Making of Christian Free Enterprise

Professor Fleming’s “Made by History” op-ed on the book is here.  She’ll be presenting it to the Washington History Seminar at the Woodrow Wilson International Center for Scholars on March 19.
Posted by Dan Ernst at 12:30 AM