We’ve just learned of the the publication Dred Scott v. Sandford: Opinions and Contemporary Commentary, (Hein), edited by Douglas W. Lind, the Director of the Library and Professor of Law at Southern Illinois University School of Law. 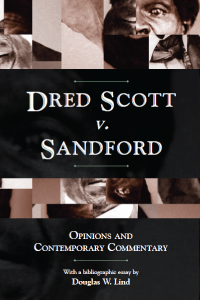 The decision in Dred Scott v. Sandford (1857), that African Americans were unable to become American citizens and therefore lacked standing to sue in federal court, and that Congress had no authority to prohibit slavery in the territories, was truly monumental in its impact on the nation and immediately generated widespread public debate. For more than one hundred and fifty years, there existed no single source containing the nine opinions that comprise the Dred Scott decision alongside the contemporary intellectual commentary.

Dred Scott v. Sandford: Opinions and Contemporary Commentary not only fills that scholarly void but also includes Professor Lind’s bibliographic essay which traces the production and transmission history of Dred Scott and details many previously unrecorded bibliographic aspects of the separately printed decision. In doing so, Lind adds important elements to the historiography of a landmark in American judicial thought—a decision which provided the textual ammunition for both sides of a debate that further divided the nation as it marched toward civil war.

Because of the modern relevance and the interdisciplinary nature of the topic, the scholarly interest in this collection should appeal not only to law school libraries but also to general academic libraries.