Old Histories Made Available by the DC Circuit Historical Society 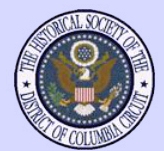 The Historical Society of the District of Columbia Circuit has recently made available ungated and on-line several long-ago published historical writings on the history of the DC courts.  As the Society’s website reports:

Both may be read or downloaded here.

In addition, James Johnston, chair of the Society’s Communications Chair, has, with the help of his committee and with the permission of the Bar Association of the District of Columbia, has complied a selection of historically significant articles from the BADC’s journal and have started posting them on the Society’s website.   Here are the Society's teasers for the first four:


In "$100,000 Awarded Plaintiff for False Imprisonment-in 1882," Jake Stein and Arthur Stambler look at the winning arguments to the jury on how to calculate damages for 45 days of wrongful incarceration in a carpeted jail cell.

Frederick Tyler takes us back to the early 1900s in "The Attorney General's Pants." When the U.S. Attorney for the District of Columbia urgently needed to hire a private detective to chase a miscreant but had no appropriation to pay one, he turned to Attorney General Philander C. Knox for help with surprising results.

Communists were the enemy during the Cold War. On appeal from the Court of Appeals for the District of Columbia, the Supreme Court ruled in 1958 that regulations denying passports to Communists were invalid. But rather than expel these perceived enemies, the government wanted to keep them in the country. The Bar Association of DC chimed in with the 1960 article entitled "Committee on UnAmerican Activities, Passport Control" in the Bar Journal.

Concerns with a nuclear attack were so pervasive during the Cold War that even the lawyers of the Bar Association of DC felt the need to take a position on the issue. In "Report of the Committee on Atomic Attack" in the Bar Journal, the Board of Directors outlined its views on preparation and the maintenance of civilian control.