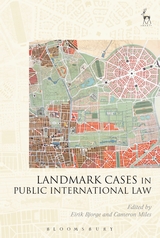 The past two hundred years have seen the transformation of public international law from a rule-based extrusion of diplomacy into a fully-fledged legal system. Landmark Cases in Public International Law examines decisions that have contributed to the development of international law into an integrated whole, whilst also creating specialised sub-systems that stand alone as units of analysis. The significance of these decisions is not taken for granted, with contributors critically interrogating the cases to determine if their reputation as 'landmarks' is deserved. Emphasis is also placed on seeing each case as a diplomatic artefact, highlighting that international law, while unquestionably a legal system, remains reliant on the practice and consent of states as the prime movers of development.

The cases selected cover a broad range of subject areas including state immunity, human rights, the environment, trade and investment, international organisations, international courts and tribunals, the laws of war, international crimes, and the interface between international and municipal legal systems. A wide array of international and domestic courts are also considered, from the International Court of Justice to the European Court of Human Rights, World Trade Organization Appellate Body, US Supreme Court and other adjudicative bodies. The result is a three-dimensional picture of international law: what it was, what it is, and what it might yet become.

9. Trial Before the International Military Tribunal at Nuremberg (1945–46)
Katherine O'Byrne and Philippe Sands

15. Military and Paramilitary Activities in and against Nicaragua (Nicaragua v United States of America) (1984 to 1986)
Robert Kolb

22. Legal Consequences of the Construction of a Wall in the Occupied Palestinian Territory (2004)
John Dugard

23. Jurisdictional Immunities of the State (Germany v Italy;Greece intervening) (2012)
Omri Sender and Michael Wood
Posted by Dan Ernst at 11:00 AM