The University of Texas Press has published Ancient Greek Law in the 21st Century, “eleven essays by leading scholars [that] chart new directions for the study of ancient Greek law.”  It is edited by Paula Perlman, a professor of classics at the University of Texas at Austin.  The volume includes an introduction jointly authored and achapter authored by Adriaan Lanni, Harvard Law School.  Professor Lanni's chapter is "From Anthropology to Sociology: New Directions in Ancient Greek Law Research." 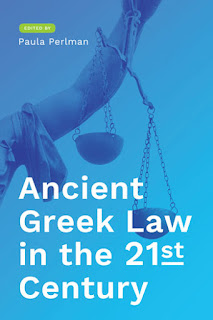 The ancient Greeks invented written law. Yet, in contrast to later societies in which law became a professional discipline, the Greeks treated laws as components of social and political history, reflecting the daily realities of managing society. To understand Greek law, then, requires looking into extant legal, forensic, and historical texts for evidence of the law in action. From such study has arisen the field of ancient Greek law as a scholarly discipline within classical studies, a field that has come into its own since the 1970s.

This edited volume charts new directions for the study of Greek law in the twenty-first century through contributions from eleven leading scholars. The essays in the book’s first section reassess some of the central debates in the field by looking at questions about the role of law in society, the notion of “contracts,” feuding and revenge in the court system, and legal protections for slaves engaged in commerce. The second section breaks new ground by redefining substantive areas of law such as administrative law and sacred law, as well as by examining sources such as Hellenistic inscriptions that have been comparatively neglected in recent scholarship. The third section evaluates the potential of methodological approaches to the study of Greek law, including comparative studies with other cultures and with modern legal theory. The volume ends with an essay that explores pedagogy and the relevance of teaching Greek law in the twenty-first century.